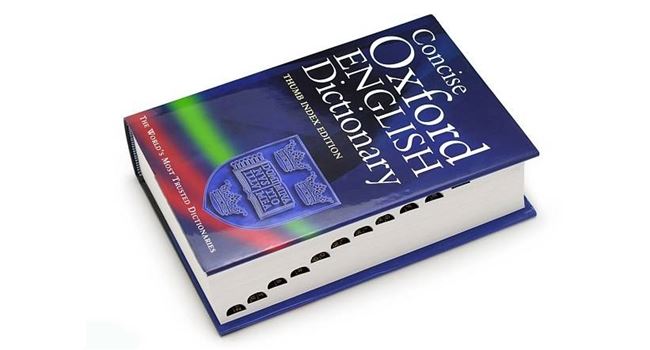 In a move that has come as a palpable surprise to many discerning locals, a total of 29 Nigerian words and expressions have been included in the Oxford English Dictionary (OED) January updates for the first time.

A closer look at the newly added words on the Oxford English Dictionary shows that majority of these new additions are either borrowings from Nigerian languages or unique Nigerian coinages that have only begun to be used in English in the second half of the twentieth century, mostly in the 1970s and 1980s, findings reveal.

Some of the new words included are; ‘Ember Month’, ‘Danfo’, ‘Non-indigene’, ‘Guber’, ‘Tokunbo’, ‘MamaPut’, ‘Kannywood’ and ‘Next Tomorrow’ with reports revealing that Kannywood, which refers to the film industry in northern Nigeria, is believed to be the youngest expression on the list.

According to the OED, ‘Next Tomorrow’ was first used in written English as a noun in 1953 and as an adverb in 1964.

On its website which also includes other words like ‘Buka,’ ‘Bukateria’ the OED editors noted that they have been expanding their representation of written and spoken pronunciations from an increasing number of global varieties of English since 2016.

“This was the perfect opportunity for OED’s pronunciation team to add a West African English model to our World English coverage, bringing our current total to fifteen,” their statement read.

See list of newly added Nigerian words of OED below;

1. Buka: One particularly interesting set of such loanwords and coinages has to do with Nigerian street food. The word buka, borrowed from Hausa and Yoruba and first attested in 1972, refers to a roadside restaurant or street stall that sells local fare at low prices.

2. Bukateria: Another term for such eating places first evidenced in 1980 is bukateria, which adds to buka the –teria ending from the word cafeteria.

3. Danfo: The informal transport systems that emerged in Nigeria’s huge, densely populated cities have also necessitated lexical invention. Danfo, a borrowing from Yoruba whose earliest use in written English is dated 1973, denotes those yellow minibuses whizzing paying passengers through the busy streets of Lagos, the country’s largest city.

4. Okada: Okada, on the other hand, is first attested twenty years later, and is the term for a motorcycle that passengers can use as a taxi service. It is a reference to Okada Air, an airline that operated in Nigeria from 1983 to 1997, and its reputation as a fast yet potentially dangerous form of transport, just like the motorcycle taxi.

5. Mama put: An even more creative synonym is mama put, from 1979, which comes from the way that customers usually order food in a buka: they say ‘Mama, put…’ to the woman running the stall, and indicate the dish they want. The word later became a generic name for the female food vendors themselves—Nobel Prize-winning Nigerian playwright Wole Soyinka notably includes a Mama Put character in one of his works.

6. Chop: Coming from pidgin contexts is the verb chop, which is a common colloquial word in Ghana and Nigeria meaning ‘to eat’. However, beginning in the 1970s, chop also developed the sense of acquiring money quickly and easily, and often dishonestly.

7. Next tomorrow: The oldest of the new additions that are originally from Nigeria is next tomorrow, which is the Nigerian way of saying ‘the day after tomorrow’. It was first used in written English as a noun in 1953, and as an adverb in 1964.

8. Kannywood: The youngest of the words in this batch is Kannywood, first used in 2002, which is the name for the Hausa-language film industry based in the city of Kano. It is a play on Hollywood, following the model of Nollywood, the more general term for the Nigerian film industry that was added to the OED in 2018.

9. K-leg: Also originating in the 19th century is K-leg, first attested in 1842 in British English, but now used mostly in Nigerian English. It is another term for the condition of knock knees, as well as a depreciative name for a person affected with this condition, whose inward-turning knees often resemble the shape of the letter K. It is of such widespread use in Nigeria that by the early 1980s, it had acquired a figurative meaning—a K-leg can now also be any sort of problem, flaw, setback, or obstacle.

10. Barbing salon: A few other expressions in this update would require some explanation for non-Nigerians: a barbing salon (earliest quotation dated 1979) is a barber’s shop.