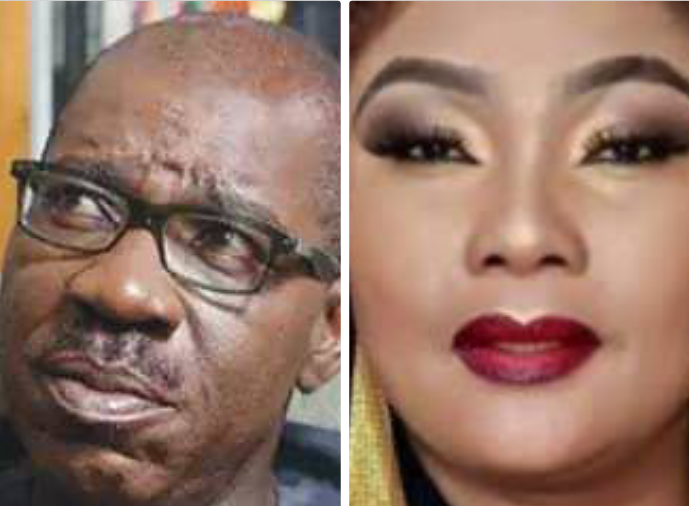 Veteran Nollywood actress, Eucharia Anunobi has opined that long hours of s3x does not in any way bind couples.

According to the actress, people should not try too hard to maintain attraction in relationships via only ‘physical’ means.

Speaking further, the actress-turned-preacher stated that people should remain single until they feel the necessity to go into a relationship that is worthwhile.

“Deception thrives when the truth is not told,” the actress stated.

Eucharia continued, “Long hours of s3x is not what binds couples together, otherwise all the men would have been bound in the gallows of lust by prostitutes. SINGLEHOOD IS NOT STUPIDITY. ALONENESS SHOULD NOT DRIVE YOU TO THAT SLAUGHTER BED BECAUSE OF THAT ” ITCH ”

Edo State governor, Godwin Obaseki on Friday, February 18 speaking at the education town hall meeting disclosed that it is time for the state to utilize the intelligence of yahoo boys.

According to the state governor, internet fraudsters colloquially known as Yahoo boys must be intelligent to execute such illegal activities and that efforts must be made to redirect their thinking for positive and legitimate use.

During his speech, he mentioned that he was prepared to investigate why the practice was prevalent in his domain.

He stated that he was prepared to curb the ‘yahoo culture’ and re-engineer the mindset of the youths in Edo State.

Nollywood actor, Jim Iyke during a session with media personality, Chude Jideonwo on #WithChude explained that he has been married once.

According to the self-acclaimed Nollywood bad boy, he has been involved in a failed marriage and he has ‘two… three children’.

“I have had a failed marriage, so many failed…and nobody knows. I have two…three beautiful kids, how are you going to know,” he said.

The movie star also talked about trying his hands on several businesses that eventually failed.

Jim Iyke went further to describe himself as only human and not an island to himself.

Big Brother Naija Gobe star Bisola Aiyeola during a session with media personality Taymesan explained what she went through as a single mother.

The entertainment polymath spoke about the difficulties she experienced after taking in at the age of 23.

She stated that nursing an infant was difficult since she fed her with garri and diapered her with her mother’s old scarves, gele, iro, and buba.

The reality star has since been eulogized on social media after the interview surfaced on-line.

Singer Peruzzi discloses why he can never become social activist

Peruzzi, a member of Davido’s Music World (DMW) crew has explained that he can never write about what he has not experienced.

Taking to the microblogging site, Twitter, Peruzzi stated that he prefers to only write about what he has been through.

Peruzzi had this to write:

I Can’t Sing About What I Ain’t Experienced.
I Can’t Write About “Suffering”.

The singer elevated a billboard at the Lekki Toll Gate, Lagos Island, which displayed photos of the businessman.

E-money uploaded the video on Instagram, showing off the billboard.

The businessman also thanked his brother for the gift.

Ugandan artiste sweeps the streets for coming late to show

Popular Ugandan artiste, Pallaso was punished on Monday, February 14 for appearing late for the Valentine’s Day event he was scheduled to headline.

The Ugandan recording artiste was forced to sweep the streets of Masaka City and also apologize to his fans.

The singer also took to his social media pages on Tuesday to ask for forgiveness from his fans.

“To all my fans in Masaka, I sincerely apologize for making it late for the show last night. I understand why you ran out of patience and the situation went out of hand. It was my fault and I am truly sorry,” he wrote.

“I have swept a few streets with my friends downtown Masaka today to remind you that I am your son and you mean the world to me. I can’t be anything without you. I hope my apology will bring you closer to me. I am so sorry for hurting you. Forgive me please,” he added.

A post shared by King Of The East (@pallasomusic)