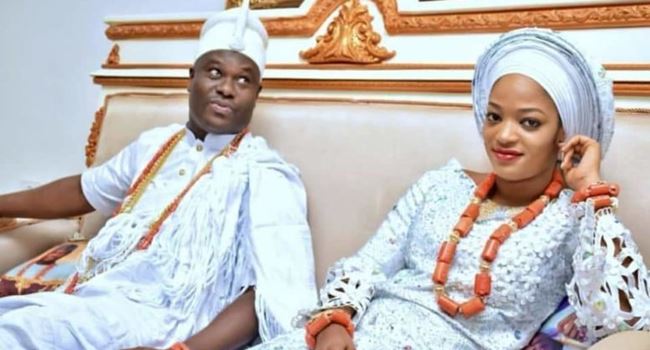 Queen Naomi Silekunola, the estranged wife of the Ooni of Ife, Oba Adeyeye Enitan Ogunwusi released a video on her social media platform, Instagram where she disclosed that ‘she is nobody’s ex’.

The video is coming barely two months after the Olori announced that her marriage with the monarch is over.

Specifically, the Queen had the lyrics of ‘I Am Beauri’ by Afro-soul singer, Bassey Kenneth, popularly known as Beekay playing in the background of her video.

The lyrics to the song reads; “I’m a beauri, I be spec, I drip glory, I be nobody’s ex, haters go hate o, potatoes will potate.”

It is not clear if the Ooni and his wife have resolved their differences.

The Ooni of Ife and Queen Naomi got married about three years ago and have a son together.

Veteran Nollywood actress, Kate Henshaw, was seen slamming a police officer who she claimed tried to jump the queue at a petrol station.

Henshaw took to her Twitter page on Monday to lament about the long queues at certain filling stations in Lagos. “The fuel queues in my area are bad! Oh Nigeria.

Several hours later, the actress posted a video on her page where she was challenging a police officer for not waiting his turn like others on the queue.

50mins still on the queue and this is what someone who is supposed to uphold the law does!
Jumped the queue & he was allowed inside.
A few sane pple joined me to make him leave & go wait his turn..
Enough already! This suffering is too much…😤🤬🤬🤬 pic.twitter.com/lJGWadFzda

Billionaire DJ Cuppy explains why she hates to glamourize her life

Billionaire heiress and Nigerian entertainer, Florence Otedola, renowned as DJ Cuppy, has stated the reason she hates to glamourize her life.

The Oxford University student made this known on her Instagram story earlier in the week as she noted that schooling and being a presenter wasn’t an easy task for her.

According to her, she really worked hard and hated to glamorize her life.

“Being a full time student at Oxford University and part time radio presenter at the BBC is not easy. I hate to glamorize my life. I really work hard. There’s no other way to put it.”

BBNaija star tackles trolls who have made her feel ugly

Big Brother Naija Shine Ya Eyes third runner-up, Angel Smith had a message for trolls who made her feel ugly about herself.

“I can’t believe BBNaija fans tried to convince me that I was ugly. Me? Best in beauty?” Angel questioned.

She went on to list all the deals she has worked with and amassed since she appeared on the show.

The 21-year-old reality star continued, “My theory of life is that you cannot suddenly hate someone you claimed to love. I don’t think it’s that easy to stop loving someone, especially without good reason.”

Barbara, one of the baby mamas of Nigerian recording artiste, Timaya has hilariously explained why she’s glad their children took after her in academics.

The mother of two who shared a Snap that captured her kids’ perfect score in a school work, stated that she’s glad their kids took after her because all that is in their father’s head is “music and big derriere”.

See the result below.

On Monday night, Cardi B posted a tweet, stating that she would ‘lock’ her daughter’s page when a twitter user brought the trolls’ comments to her notice.

“This is Kulture’s comments right now. They really have some nerve trying to play moral police on here.”

She noted that although she had not been checking her daughter’s account, she will lock the page.

The mother of two also slammed the trolls who left negative comments on her daughter’s page.

“I haven’t been checking my daughter account but now I’m going to lock her page. I don’t know wtf is going on but I hope y’all moms die for giving birth to you he as weirdos.”

American entertainer, Nick Cannon has been gifted a vending machine amassed with ‘protection’ ahead of the Valentine’s Day celebration after it was speculated that he is expecting his 8th child.

The former rapper and Wild N’ Out television star was gifted the vending machine by popular comedian, Kevin Hart.

The 40-year-old rapper said the stunt caused some upset.