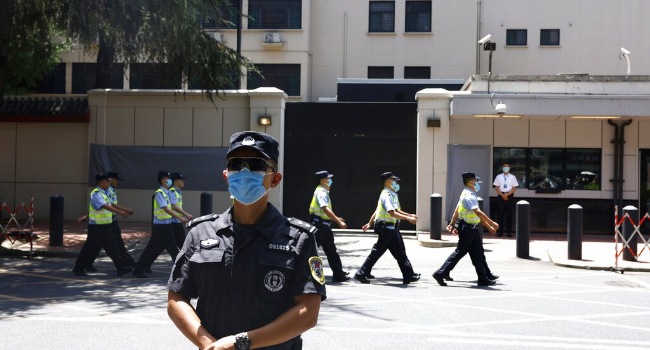 Authorities in China on Monday took over the former U.S. Consulate in the southwestern city of Chengdu on.

Reports say the move came days after it was ordered closed by Chinese authorities amid ever-rising tensions between the two global powers.

The Chinese governmen had ordered that the mission be shut in retaliation for a U.S. order to close the Chinese Consulate in Houston.

Reacting to the action by the Chinese government, the US State Department in a statement expressed disappointment, saying the consulate “has stood at the center of our relations with the people in Western China, including Tibet, for 35 years.”

READ ALSO: China rages as US orders closure of its consulate in Houston

“We are disappointed by the Chinese Communist Party’s decision and will strive to continue our outreach to the people in this important region through our other posts in China,” the statement said.

China’s foreign ministry issued a brief notice saying “competent authorities” entered through the front entrance and took over the premises after U.S. diplomats closed it at 10 a.m.

This came days after four United States officials reportedly broke into the Chinese consulate in the city of Houston and entered the diplomatic mission.

Reports say the US officials wearing face masks stormed the premises on Saturday and forced the door of the building open, shortly after staff at the Chinese consulate vacated the building on the orders of the government.