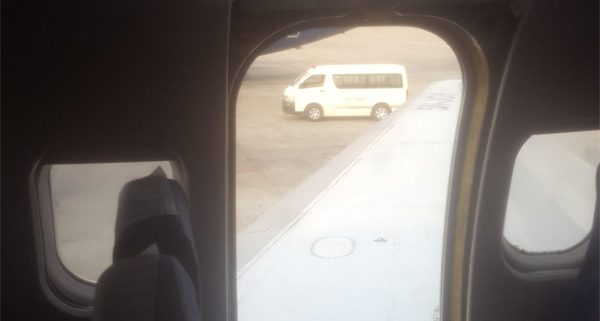 The Nigerian Civil Aviation Authority (NCAA) has set up a four-man probe team to look into the alleged claim that the door of an aircraft belonging to Dana Air was shaky while on flight and eventually fell off upon landing in Abuja.

NCCA made the announcement on Wednesday after one of the passengers, Ola Brown, made the claim in a twitter message.

Using his Twitter handle, @NaijaFlyerDr, he had claimed, “Flew Dana. Exit door was unstable throughout the flight. As we touched down, it fell off. Scary stuff.”

Reacting to the tweet, the Senate President Bukola Saraki stated that such an incident is unacceptable, and that the Senate will take up the matter.

According to him, “The safety of passengers and conditions of aircrafts must be the primary concern of all airlines that are operating in Nigeria.

“An airline door falling off is unacceptable. We will take this up at the Senate. It must not happen again”.
NCCA General Manager, Public Affairs, Mr. Sam Adurogboye, latter announced that the agency was working to establish what must have happened.

He said, “The affected plane has been certified safe and returned to service but we have set a four-man team to investigate what actually happened. If the plane was faulty, it would not have been cleared to take off.”

Responding in a statement signed by its Media and Communications Manager, Kingsley Ezenwa, Dana Air claimed, “Dana Air’s attention has been drawn to some online publication that the door of one of our aircraft fell off after landing and while taxing in Abuja today. We wish to state categorically that this could never have happened without a conscious effort by a passenger to open it.

“By design, the emergency exit door of our aircraft are plug-type backed by pressure, which ordinarily cannot fall off without tampering or conscious effort to open by a crew member or passenger. We also wish to enlighten the author that when an aircraft is airborne, it is fully pressurised and there was no way the seat or door could have been ‘shaking’ as insinuated.”

According to Ezenwa, “a thorough investigation is ongoing.”

This is coming just as a recent Ripples Nigeria investigative report revealed lack of transparency in the Imo Air deal involving Dana Airline and Imo State government of Rochas Okorocha.

Some citizens of Imo State believe there is urgent need for the anti-graft agencies in the country to demand that Governor Okorocha, and Dana Air, come clean on the Imo Air project.

The plane with registration number 5 N-DEV from Port Harcourt, used its left wing to hit a fence while trying to park.

Luckily, no injury was recorded.

However, in a tragic incident that shook the nation to its marrows in June 2012, a Lagos-bound Dana Air from Abuja, crashed into a two-storey building at Ishaga, at the outskirts of Lagos, killing all 153 passengers.

The aircraft, marked 5N-RAM, disappeared from the radar scope of the Lagos Air Traffic Control after communication from the tower to the pilot in command failed, before it crashed into the residential building on Tolulope Street, in Toyin area of Ishaga.