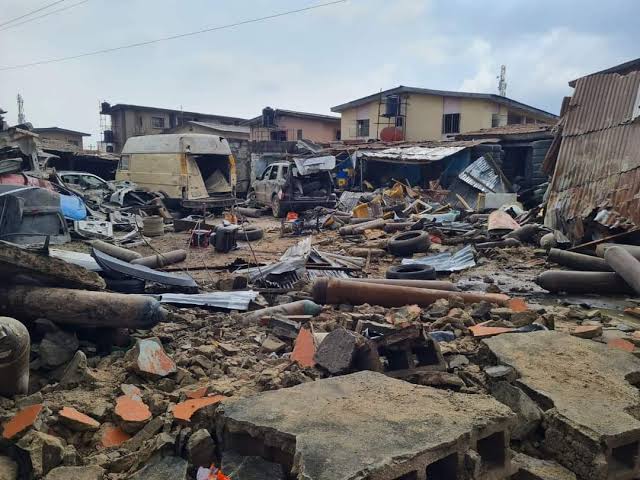 Five people have been confirmed dead following the gas explosion that occurred at Ladipo in the Mushin Local Government Area of Lagos State.

According to Farinloye, the bodies of four adults comprising of three men and a woman identified as Mama Funmi have so far been recovered from the scene of the explosion.

Also, he said a 10-year-old boy was rescued and taken to the hospital but died before getting to the medical centre.

Farinloye stated that the fire at the scene had already been put out while emergency workers were making effort to recover more bodies.

He added that those present include personnel of NEMA, Lagos State Emergency Management Agency (LASEMA), Lagos State Fire Service, and the police.

Ripples Nigeria reported earlier that the Lagos State Fire and Rescue Service had confirmed the gas explosion, which occured at 21, Ojekunle Street in Ladipo, Lagos.

The Director, Lagos State Fire and Rescue Service, Mrs Margaret Adeseye had also confirmed the development, saying the gas incident was reported at about 08:42 am by the State Emergency Reporting Platform.

She noted that on arrival at the scene of the incident, the Service discovered that it was an open space used for several activities including a beer parlour, mechanic workshop, spare parts sale, and a gas shop amongst others while housing a makeshift structure.

“Three male adults had been recovered as rescue and recovery operations continue in the environment isolated from causing any further secondary incident.

“Preliminary investigations to establish the fact of the incident continue and further discovery will be made public,” Adeseye said.

Related Topics:Gas explosion Lagos
Up Next

Police arrests 12 over killing of CSP Abonde, suspects to be arraigned in court today