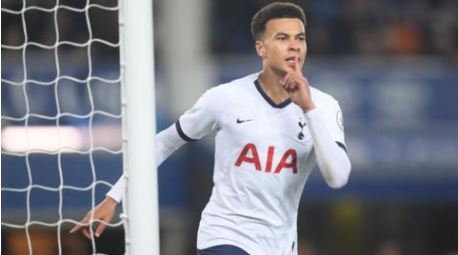 England and Tottenham midfielder, Dele Alli will have to pay £50,000 as fine and also miss a match, over a post he made on social media.

The 24-year-old incurred the wrath of the Football Association with a post on social media he made about coronavirus.

Alli posted a video on Snapchat in February in which he joked about the outbreak and appeared to mock an Asian man.

The video Alli him wearing a face mask in an airport lounge, before the camera moved to show a man of Asian appearance, and then zoomed in on a bottle of antiseptic handwash.

In addition to the fine, the English FA has also ordered Alli to undertake an education course.

In a statement, Alli said: “In response to the FA decision, I would like to apologise again for any offence caused by my behaviour.

“It was an extremely poorly judged joke about a virus that has now affected us more than we could ever have imagined.

“I’m grateful that the FA has confirmed that my actions were not racist because I despise racism of any kind. We all need to be mindful of the words and actions we use and how they can be perceived by others.”