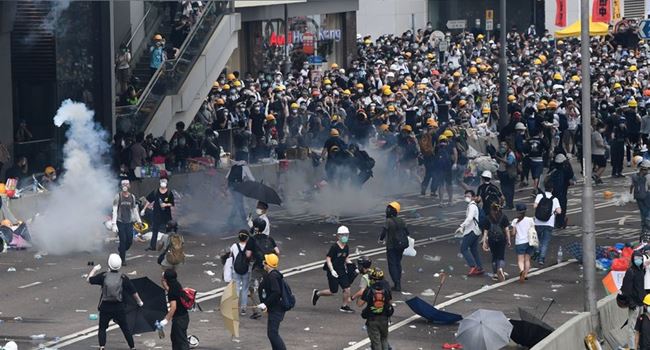 The city of Hong Kong has been left crippled by ongoing pro-democracy protests as thousands of demonstrators launched a rare city wide strike.

Reports say no less than eight railway lines, including the airport express, were shut fully or partly as several protesters were seen blocking entrances to the commuter trains.

Also, an estimated 200 flights were also cancelled on Monday, and only one of two runways in the city’s main airport is operating.

Al Jazeera‘s Andrew Thomas, reporting from Hong Kong, said that many of the streets in the city are left empty.

“This is a city where there’s very little, it feels anyway, economic activity going on at the moment.”

Reacting to the ongoing protests, the semi-autonomous territory’s Chief Executive Carrie Lam warned on Monday of the “dangerous path” the demonstrations are heading.

During a press conference, she said the protests “challenge ‘one country, two systems’ and threaten Hong Kong’s prosperity and stability”.

“The government will be resolute in maintaining law and order of Hong Kong and restoring confidence.”