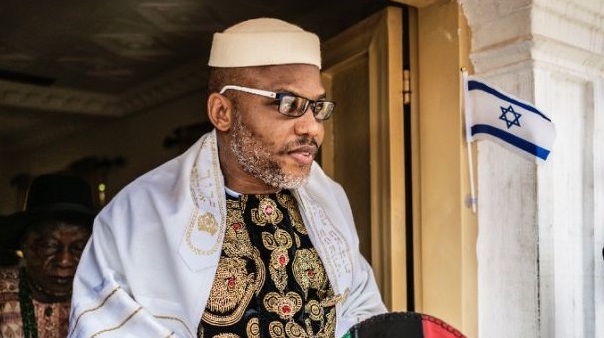 The leader of the proscribed Indigenous People of Biafra (IPOB), Nnamdi Kanu has cautioned his followers not to condemn the Spiritual Director of the Adoration Ministry, Enugu State, Rev Father Ejike Mbaka following his suspension by Bishop Calistus Onaga.

It would be recalled that Mbaka who had been an active supporter of President Muhammadu Buhari recently called for his impeachment, saying he was incompetently leading the country.

Following the call, the Presidential spokesperson, Garba Shehu responded to the priest, accusing him of being angered because Buhari refused to award him a contract for his support during the last presidential election, and threatened to report him to the Vatican and the Pope.

However, the priest disappeared for a while after his call for Buhari’s resignation, which raised a lot of security questions that led to a protest by his supporters,

It was later gathered that the priest was summoned by the Catholic Bishop of Enugu Diocese where he was kept incommunicado, without any access to the outside world, as the priest disclosed that the Diocese had planned to keep him for 30 days.

Following the development, Kanu in an audio broadcast cautioned people of the South-East region not to join in condemning the clergyman.

He said: “Let me tell our people something they don’t understand. In a normal country so to speak, the condemnation of Father Mbaka you may welcome somehow.

“I know sometimes regardless of our shortcomings, we are brutal in the way we think. Biafrans are very brutal, very pure. We see what is bad and say is bad.

“It doesn’t matter who is doing it. That’s why a lot of people came down heavily on Father Mbaka but I’m telling you this, yes in Biafra, we can do anything we like to him. But, in Nigeria, as far as Nigeria is concerned, never condemn your own.”

PDP: Afegbua threatens to sue Secondus for N3bn, insists he must account for ‘looted’ N10bn

If Leah Sharibu were a Muslim, there would have been war —Christian group