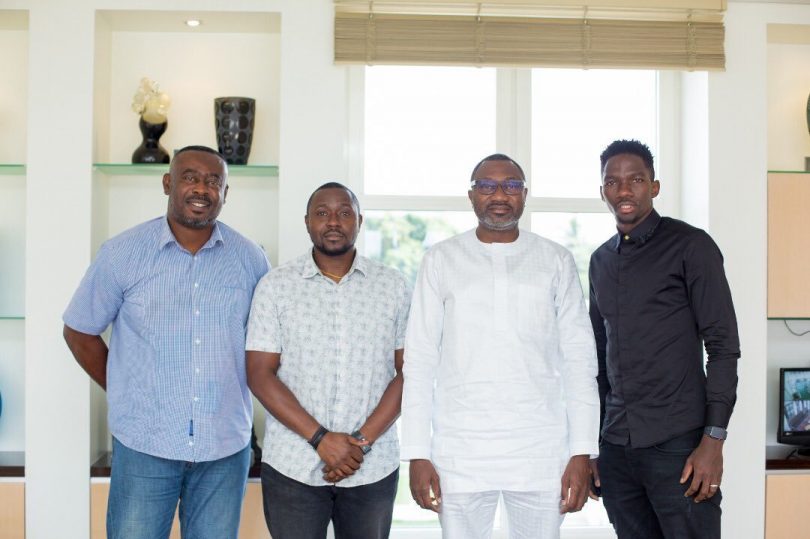 Super Eagles have expressed their gratitude to business mogul, Femi Otedola, after he redeemed the $25,000 pledge he made to the team during the 2019 Africa Cup of Nations (AFCON).

In a bid to spur the national men’s team to go all the way to the final, Otedola, before the semifinals, promised to give the team $25,000 for every goal they score.

But alas, Nigeria were beaten 2-1 in the semifinal by the Desert Foxes of Algeria, with the only goal scored being that of Odion Ighalo from the penalty spot.

Otedola redeemed the pledge on Tuesday during a visit to his office by Kenneth Omeruo alongside, team administrator, Enebi Achor and equipment management, Chidi Ngoka.

“Business mogul Femi Otedola has fulfilled his pledge of $25,000 to the @NGSuperEagles for their one goal against Algeria in AFCON 2019 semi final,” the Nigeria Football Federation (NFF) wrote on Twitter.

Writing on behalf of himself and his teammates, defender Omeruo took to his social accounts to say thank you.

“On behalf of the Super Eagles I want say thank you to @femiotedola for receiving us today redeeming your pledge,” Omeruo tweeted on his Twitter platform and also posted on his Instagram page.

Recall that the president of Dangote Group, Aliko Dangote also pledged $50,000 per goal on the eve of Nigeria’s last-four clash against Algeria in Egypt.

Dangote is yet to redeem his own.