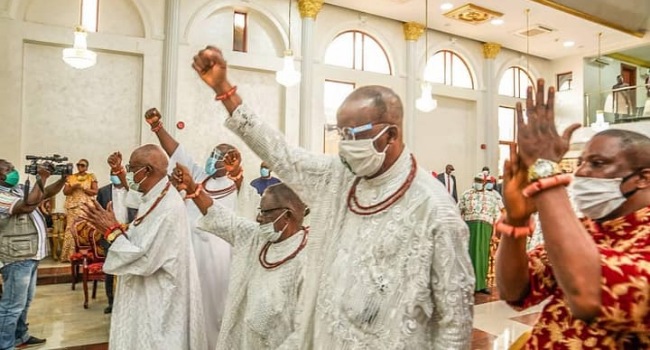 The Peoples Democratic Party (PDP) Chairman for the Edo State governorship election campaign and governor of Rivers State, Nyesom Wike, on Saturday led other governors of the party on a courtesy visit to the Palace of Oba of Benin, His Royal Majesty, Omo N’Oba N’Edo Uku Akpolopolo, Oba Ewuare II.

Other governors in the Entourage to the Oba were Ifeanyi Okowa of Delta State and his counterparts in Sokoto, Aminu Waziri Tambuwal.

The visit came ahead of the flag-off of Governor Godwin Obaseki’s campaign for re-election in the September 19, 2020 Governorship poll in Edo State.

Other governors already in the state for the flag-off were Duoye Diri, Seyi Makinde and Sen. Bala Muhammed of Bayelsa, Oyo and Bauchi States respectively.

The party said in a series of posts on its social media handle that the Obaseki and Shaibu Philip flag-off campaign is taking place at the Lawn Tennis Court of the Samuel Ogbemudia Stadium, “with strict compliance with the coronavirus directives issued by the Federal Government and the Independent National Electoral Commission (INEC) for public gatherings.”