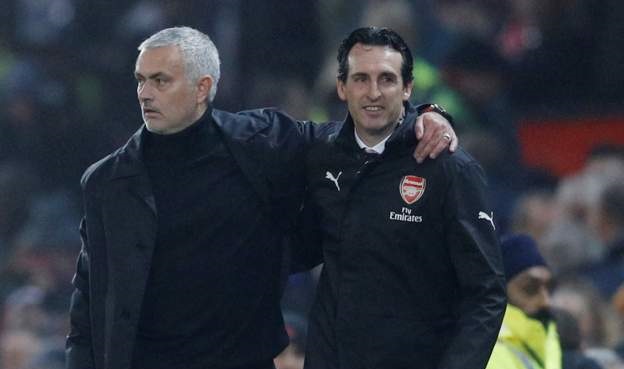 Super Eagles forward, Alex Iwobi was on from the start for Arsenal in their 2-2 thrilling draw with Manchester United at Old Trafford on Wednesday night.

The Premier League encounter saw both sides fight out a frenetic draw that further extends the unbeaten run of the visitors.

Shkodran Mustafi’s header squirmed through goalkeeper David de Gea’s hands to open the scoring for the Gunners on 26 minutes, but the lead did not last as Anthony Martial swept home Ander Herrera’s cross just four minutes after to level.

In the second half, Alexandre Lacazette, who replaced Iwobi, bundled in a goal following a Marcos Rojo mistake to regain the lead for Arsenal.

But the Unai Emery men surprisingly lost the lead again after 74 seconds, as Jesse Lingard exploited a mix-up between Sead Kolasinac and goalkeeper Bernd Leno to equalise.

The result means Arsenal have gone 20 straight games without defeat in all competitions, and they stand 5th on the table with equal points as fourth-placed Chelsea.

Elsewhere, Wolverhampton Wanderers fought back from a goal down to stun Chelsea and gain their first victory in seven Premier League matches.

The Blues went ahead 18 minutes into the game when Ruben Loftus-Cheek’s 25-yard effort was headed into his own net by Wolves captain Conor Coady.

Chelsea had several chances to extend their lead but failed to converted those chances, with Willian and Alvaro Morata missing the target at different times.

The hosts equalised in the 59th minute from a Raul Jimenez’s low strike, before what proved to be the winner four minutes later as Matt Doherty’s cross was finished at the back post by Diogo Jota.

Elsewhere, Liverpool also came from behind to win 3-1 at Burnley, Everton played 1-1 draw with vistors Newcastle while Tottenham defeated Southampton 3-1.

Super Eagles duo of Kelechi Iheanacho and Wilfred Ndidi were both in action for Leicester City, who held their hosts, Fulham, to a 1-1 draw.

The result leaves Fulham bottom of the table, while Leicester remain ninth.