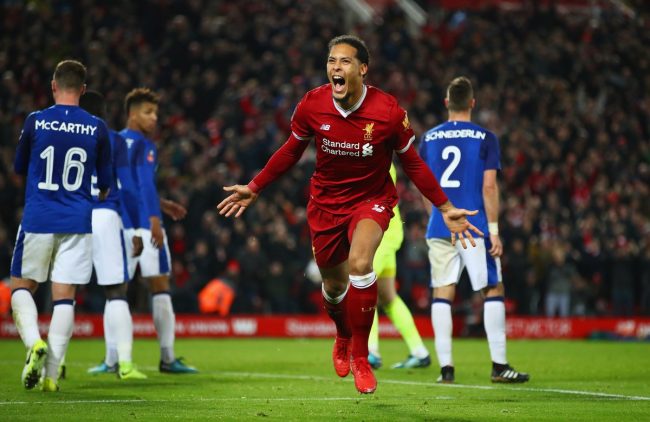 New signing, Virgil van Dijk scored the winner on his debut following his £75m move to Liverpool as the Reds edged past Everton to move into the fourth round of the English FA Cup.

The Merseyside derby lived up to expectation on Friday night at Anfield, as goals by James Milner (penalty) and Gylfi Sigurdsson kept the two sides on level a little over an hour into the game.

But six minutes to time, Van Dijk, who became the most expensive defender in world football after his move from Southampton this week, headed in Alex Oxlade-Chamberlain’s corner to decide the game.

“What a night. It was thoroughly deserved, it felt amazing to be out there, the goal is very special for me and my family.

“Playing at Anfield for Liverpool is a dream for every player. To score a goal is even more special”, Dijk said after the victory.

Also on Friday at Old Trafford, Manchester United advanced to the fourth round of the competition with a 2-0 victory over Championship side, Derby County.

It was an entertaining encounter as both sides played goalless until the 84th minute when Jesse Lingard sent a 20-yard shot on the bounce into the top corner for the opener.

And on the stroke of 90 minutes, half-time substitute Lukaku sealed the win after playing a one-two with Anthony Martial to cap off a counter attack.

Having crashed out of the Carabao Cup, the Red Devils will play next at home against Stoke City in the Premier League on January 15.