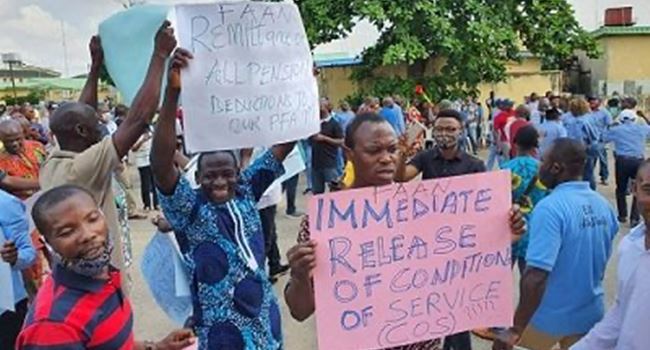 The Nigerian Union of Pensioners, Federal Airports Authority of Nigeria branch, has revealed its plans to commence a nationwide protest with effect from May 4, 2021, due to the failure of FAAN to implement a new payment agreement.

This was disclosed by the National Secretary of NUP, FAAN branch, Emeka Njoku, at a rally held at the local Airport Ikeja on Wednesday.

According to Njoku, the management of FAAN had bluntly refused to implement Conditions of Service as reached by the committee set up by FAAN over the disparity in salaries.

“The committee recommended that 18 per cent should be paid to level 1 – 14 to cushion the large disparity in the system as it was noticed during implementation,” he noted.

Njoku explained that it was agreed by the aviation ministry that levels 1 – 14 should benefit from it since levels 15 and above were already operating it.

The NUP scribe noted that the committee ended its sitting and submitted its recommendations before the COVID-19 pandemic and but FAAN failed to implement it.

“All members of NUP would from May 4 be mobilised for protests in airports across the country,” Njoku noted while stating that FAAN owed them in arrears since the COS was implemented in 2019.

Related Topics:airportsFAAN pensioners
Up Next