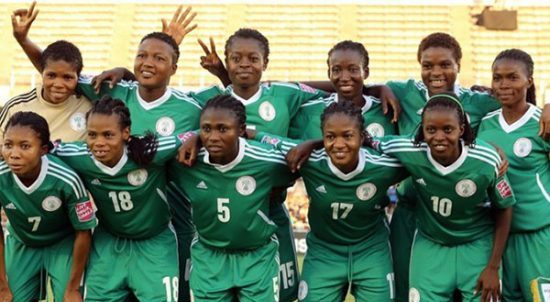 Nigeria’s U-20 women’s team, the Falconets, have been drawn alongside Haiti, China and Germany in Group D of the 2018 FIFA U-20 Women’s World Cup scheduled to hold in France.
The draw ceremony, which held at the Opera House, Rennes on Thursday, saw Africa’s other representatives Ghana in Group A alongside the hosts, New Zealand and Netherlands.
Ghana will play France in the opening game of tournament. On August 5.
Meanwhile, Group B consists of North Korea, England, Mexico and Brazil while Group C has Japan, USA, Paraguay and  Spain.
Read Also:  UCL: Juve deserved qualification over Spurs —Allegri
The global showpiece will be from August 5th to August 24, and games will be hosted in the cities of Vannes, Concarneau, Saint-Malo and Dinan/Léhon.
U-20 Women’s World Cup groups:
Group A:
France,
Ghana
New Zealand
Netherlands
Group B:
Korea DPR,
England
Mexico,
Brazil
Group C:
USA,
Japan,
Praguay
Spain
Group D:
Haiti
China PR
Nigeria
Germany