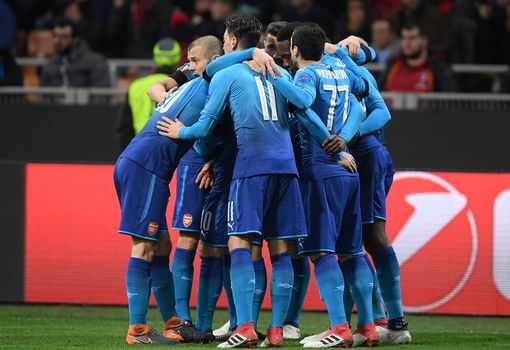 The Gunners put their recent problems behind them as they bounced back with a resounding victory over the Serie A giants in the last-16 tie of Europa.

In their quest to end a run of four straigh defeats, Arsenal got ahead in the first half when Henrikh Mkhitaryan cut in from the left to fire in with the aid of a deflection off Milan skipper Leonardo Bonucci.

Aaron Ramsey deservedly doubled their lead before half-time, thanks to a Mesut Ozil piercing pass.

Read also: UCL: Spurs crash out, Man City lose but through to quarter-finals

The hosts tried to up the tempo of the game after the break but Arsene Wenger’s men were strong enough to hold on till the end.

As it stands, the two away goals make the Gunners the favourites to reach the quarter-finals when they host the reverse fixture next Thursday at Emirates Stadium.

In another Europa League clash on Thursday, Bundesliga giants, Borussia Dortmund were stunned 2-1 at home by Austrian champions, RB Salzburg.