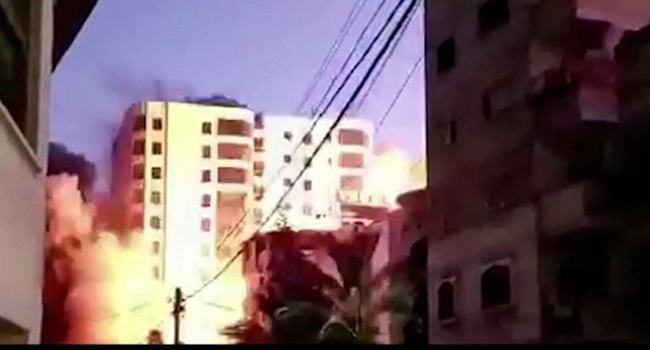 There are fears that the ongoing clash between Israel and Hamas may snowball into full-scale war as both sides continued to trade fire on Wednesday in the worst fighting between the sides in years.

This was contained in a tweet issued by the UN Special Coordinator for the Middle East Peace Process Tor Wennesland.

“We’re escalating towards a full-scale war. Leaders on all sides have to take the responsibility of de-escalation. The cost of war in Gaza is devastating and is being paid by ordinary people.”

Stop the fire immediately. We’re escalating towards a full scale war. Leaders on all sides have to take the responsibility of deescalation. The cost of war in Gaza is devastating & is being paid by ordinary people. UN is working w/ all sides to restore calm. Stop the violence now

Israel has struck a range of targets in the Gaza Strip as part of its airstrike response to the more than 1,000 rockets Palestinian militants have launched towards its territory since Monday.

The Health Ministry in the Hamas-run Gaza Strip said the number of Palestinians killed has risen to 53, including 15 children, while some 320 people were reported injured.

Around 850 of the missiles launched by Palestinian forces were intercepted or went down in Israel, while some 200 misfired and landed in the Gaza Strip, according to the Israeli military.

Hamas’ military wing said 15 rockets were fired in the direction of the Israeli desert city of Dimona, where an Israeli nuclear reactor is located. The complex, however, is considered to be extremely well protected.

Israel’s military said it was responding to the barrage of rockets fired up and down its territory with the most comprehensive bombardment of the Gaza Strip since a clash between the two sides in 2014.

Five people in Israel have died due to rocket blasts, and more than 200 have been injured, the Israel Defense Forces said.

In Gaza, the Israeli army said that at least 20 members of the Islamist Hamas and Islamic Jihad militant organizations were killed, including senior officials.

The airstrikes and rocket attacks followed violent clashes in recent days at the Jerusalem holy site known as the Temple Mount to Jews and the Noble Sanctuary to Muslims.

Hamas had issued a Monday night ultimatum telling Israel to withdraw settlers and police from the Jerusalem holy site, parts of which had been cordoned off, and from the Sheikh Jarrah neighbourhood.

Israeli Defence Minister Benny Gantz said there was no end date for the current operation.

China, Russia, Britain, Germany, the U.S., and a host of other nations have called on all sides to show restraint.