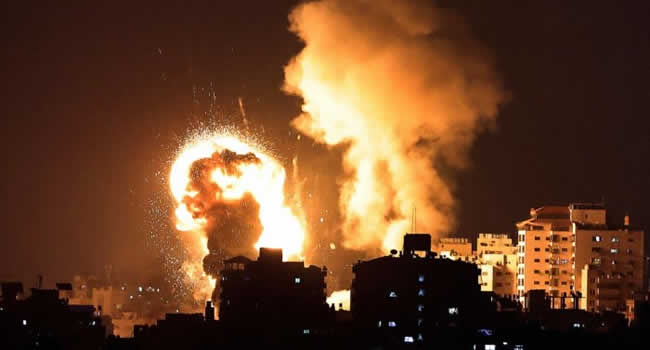 At least 24 Palestinians, including children, have been killed in Israeli air raids in the Gaza Strip after Hamas launched rockets towards Israel on Tuesday.

Justifying the air raid, Israel said the attacks were in retaliation to rockets fired by Hamas at its location.

Hamas had earlier warned Israel to stop the violence against Palestinian worshippers at Al-Aqsa Mosque in Jerusalem and backed up its threat by firing rockets at Israel.

An Israeli drone raids reportedly killed a man in the southern Gaza town of Khan Younis, according to local media reports.

In another attack, a woman was killed when a missile struck the upper floors of an apartment building in al-Shati refugee camp on the edge of Gaza City, the health ministry said.

Hamas’ armed wing said it intensified the rocket barrages following the air raid on the house.

Israel’s army said a rocket landed a direct hit on a seven-storey apartment block in the coastal Israeli city of Ashkelon on Tuesday.

Hamas, the rulers of Gaza, fired dozens of rockets into Israel, including a barrage that set off air raid sirens as far away as Jerusalem after hundreds of Palestinians were wounded by Israeli forces that stormed the Al-Aqsa Mosque compound in occupied East Jerusalem on Monday.

Tensions in Jerusalem have been driven by the planned forced expulsions of Palestinian families from the Sheikh Jarrah neighbourhood, and by Israeli forces raids on Al-Aqsa compound.