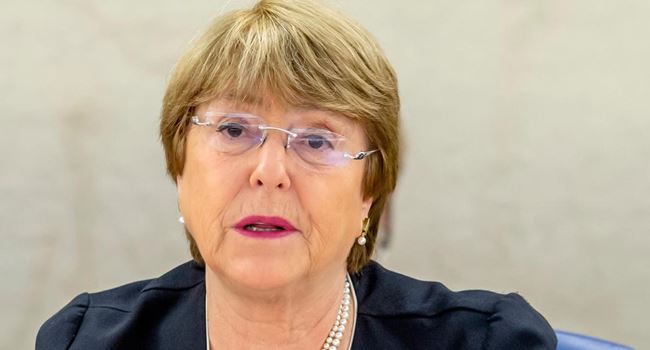 The United State of America led by President Donald Trump has been slammed by UN rights Chief Michelle Bachelet who decried “structural racism” in the country and voiced alarm at the “unprecedented assault” on journalists covering protests across the country.

Bachelet who issued a statement on Wednesday insisted that the grievances at the heart of the protests that have erupted in hundreds of US cities needed to be heard and addressed if the country was to move forward.

“The voices calling for an end to the killings of unarmed African Americans need to be heard,” Bachelet, the former president of Chile, said in a statement.

Bachelet stressed the need for clear and constructive leadership to bring the country through the crisis.

“Especially during a crisis, a country needs its leaders to condemn racism unequivocally; for them to reflect on what has driven people to boiling point; to listen and learn; and to take actions that truly tackle inequalities,” she said.

This came after Keith Ellison, Minneapolis Attorney General moved to increase charges against ex-Minneapolis Police officer, Derek Chauvin who had previously been charge with a third degree murder and second degree man slaughter in the killing of George Floyd.

According to a tweet from a US Senator, Amy Klobuchar, Chauvin would now be facing a second degree murder charge and manslaughter of the second degree.

Ellison is expected to deliver a press conference in that regard on Wednesday.

Also, other officers who were not initially charged; Tou Thao, who stood to control the gathering crowd; Thomas Lane and J.A. Kueng who assisted Chauvin in restraining Floyd will now face charges for aiding and abetting second degree murder.

Minnesota law defines a third-degree murder as one causing the death of a person “by perpetrating an act eminently dangerous to others and evincing a depraved mind,” while a murder of the second degree is defined as one that causes the death of another with intent to effect the death of that person but without premeditation.