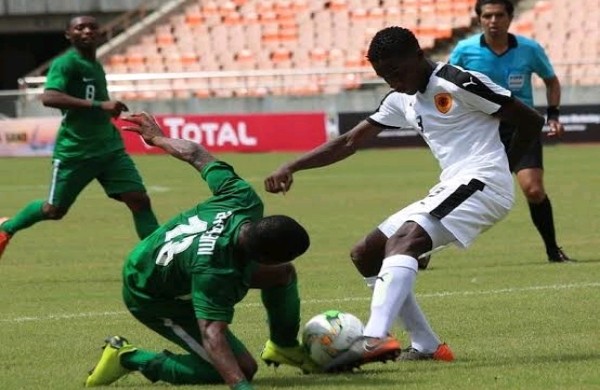 The Golden Eaglets of Nigeria lost 2-1 to Angola in the third place classification game in the ongoing U-17 African Cup of Nation taking place in Tanzania.

Nigeria’s U-17 team dominated the first half of the game but it was the Angolans who took the lead in the 28th minute through a player named Capita.

The Angolans missed a glaring opportunity to increase their tally when Capita, the scorer of the first goal of the game missed a big chance in the 35th minute as the first half ended one goal apiece to both teams.

In the second half, the Angolans came out smoking and were rewarded for their efforts when Zito scored the second goal to put his side 2-1 up against the Eaglets.

The Angolan’s were however reduced to 10-men in the game when Abrantes was sent off for a rough tackle on a Golden Eaglets player.

Coach Manu Garba made his first change in the 61st minute of the game when he took off Olaniyan and replaced him with Divine Nwachukwu.

The Eaglets did all they could to make their numerical advantage count but the game ended 2-1 in favour of the Angolan’s who held on to clinch the bronze medal at the U-17 AFCON leaving the Nigerian team to settle for fourth place.