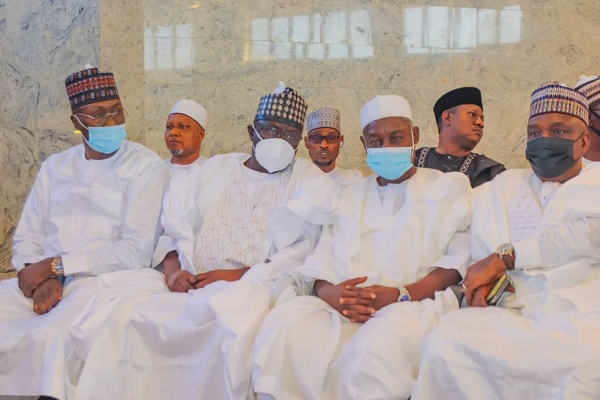 After a long session of a stakeholders meeting which ran into the early hours of Saturday on the conduct of the State Congress of the ruling All Progressives Congress (APC) in Gombe state, the stakeholders unanimously reaffirmed their earlier resolve to go by consensus method in electing the state party officials.

The enlarged stakeholders meeting was convened by the State Governor, Muhammadu Inuwa Yahaya to discuss on how best to arrive at a peaceful, rancor-free and all-inclusive exercise to ensure that the party retained power in the 2023 General elections.

While addressing the party stakeholders at the new banquet hall of the Government House, Inuwa Yahaya expressed gratitude to all APC members, particularly its stalwarts for staying true and contributing their quota to the successes so far recorded by the ruling party starting from its membership registration to wards and Local Government Congresses.

The Governor said that, “If not for the transparency adopted by the APC in carrying everyone along in the scheme of things, I am sure by now the hues and cries within the ranks of the party could have been louder and possibly created rancor in the party but we chose to consult and bring everyone on board in the interest of fairplay”.

He however assured members of the All Progressives Congress in Gombe State that as the leader of the party, he will continue to provide leadership devoid of ill-will or personal interest.

Inuwa Yahaya appealed to members of the APC in Gombe State to maintain the spirit of cooperation and understanding they displayed during the ward and Local Government Congresses.

According to him, “For this reason, I equally enjoin all of us that the State Congress slated for Saturday should also be conducted according to the APC guidelines and by the grace of God we shall do just that because until we are able to produce competent leaders only then we can be hopeful to consolidate on the party’s successes”.

He also maintained that the congresses so far conducted and the State Congress slated to be conducted Saturday were made possible through a wide consultation of party stakeholders to ensure the emergence of best candidates that can run the affairs of the party in the State.

He said that, “To this end, we shall ensure that all Local Government Areas in the State are fairly represented in the state working committee of the party in the spirit of equity and Justice”.

The Governor told the stakeholders of the APC in Gombe State that the party may not have satisfied the yearnings and aspirations of all but that in its policy of constant consultation, APC has by and large performed credibly well in carrying everyone along.

Inuwa Yahaya said that, “It is not possible to satisfy everyone at the same time so anyone who is not lucky to be selected as a leader should exercise patience hence the party is aware of him so also is the Government”.

The Committee Chairman for the Conduct of Congresses in Gombe State, Dr. Danjuma Dabo expressed optimism that the State Congress will take the form and pattern of the ward and local government congresses conducted under the atmosphere of peace and tranquility.

He also said that his committee will conduct a rigorous screening exercise to ensure that those who eventually emerge as leaders of the party at the State level are of proven integrity.