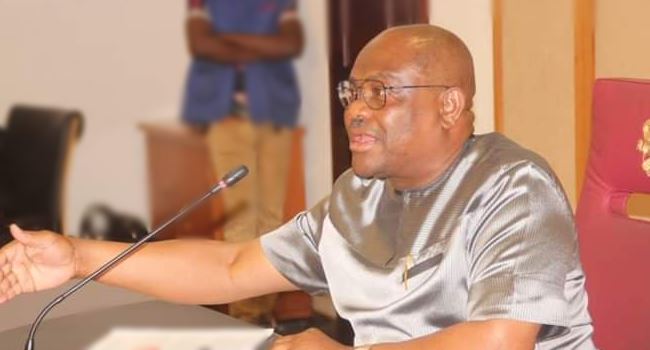 Governor Nyesom Wike of Rivers State on Wednesday accused the Niger Delta Development Commission (NDDC) of duping Rivers State Government on a partnership to build the Mother and Child Hospital in Port Harcourt.

Wike, while hosting visiting NDDC acting Managing Director, Prof Nelson Braimbaifa, at the Government House, Port Harcourt, raised the allegation to back his perception that the commission has failed to deliver on its set mandate for the region.

The governor also accused the Federal Government of refusing to constitute the NDDC Governors Advisory Committee because majority of the South-South states were under Peoples Democratic Party (PDP) rule.

He said, “NDDC has become a political institution where money is set aside for politics. Mention one mega project by the NDDC anywhere in Rivers State.

“The only mega project is the Mother and Child Hospital which was to be a joint project. NDDC duped Rivers State Government in the project. We paid our counterpart fund and NDDC paid nothing.

“We have taken over the project, yet the NDDC has refused to refund our money. If the NDDC fails to refund our counterpart fund in seven days, we will drag the commission to court.”

The commission, he noted, could only make progress when the governments and citizens of the region were involved in the process of project conception and location. He told the NDDC MD,

“You are coming because I have won election. You were on ground for six months, but never thought it wise to visit your Chief Host. Rivers State Government gave NDDC a building and take off grant to start work.

“They told you not to come, but God in his own way ensured we are still here. It is a shame that what our people in the Niger Delta fought for, is not what is on ground at the NDDC.

“You claim to have over 1000 projects in Rivers State and we are still where we are today?”

Afenifere, Ohanaeze carpet ACF for alleging stereotyping of the Fulani