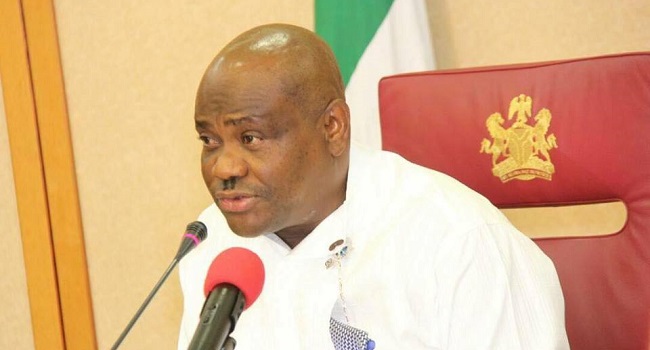 The people of Rivers State will never have a sole administrator, so says governor Nyesom Wike.

Wike made the assertion in the state capital, Port Harcourt, as 86 political parties conceded defeat to him in the state governorship election, during a solidarity visit to the Government House.

He also added that the people voted for their preferred candidate during the March 9 elections staged in the state, therefore they must have a governor.

“No matter how delayed, Rivers State will have an elected governor.

“It is not the portion of Rivers State to have a sole administrator. Our people voted on March 9 and Rivers votes will count,” Wike said.

The state governor also added that a government of unity will be set up as soon as the Peoples Democratic Party (PDP) is declared the winner of the state governorship elections.

“If we are declared the winner of the election, we will operate a government of unity.

“We will rally everybody together in the interest of the state,” he added.

Related Topics:It is not the portion of Rivers State to have a sole administratorNigerian newspapersripples nigeriaWikeWike moves to set up government of unityWike says
Up Next

Dokpesi arrested, released after one hour of detention

RERUN: Come out to vote leaders of your choice, Buhari tells Nigerians