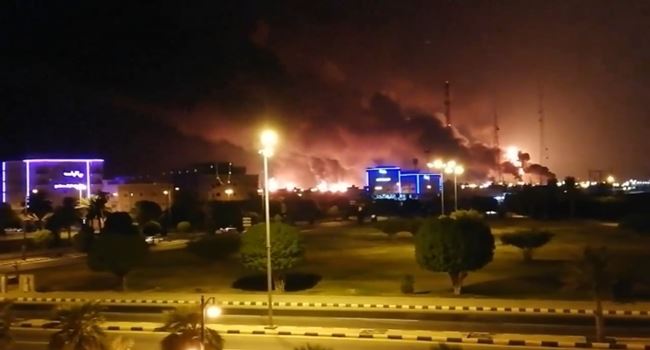 Yemen’s Houthi rebels have claimed responsibility for the attacks on two oil facilities in the Abqaiq and Khurais areas of Saudi Arabia vowing to widen their range of targets in the oil rich country.

While claiming responsibility for the incidents, the Houthis on Saturday said the attacks were carried out by 10 drones.

“These attacks are our right, and we warn the Saudis that our targets will keep expanding,” spokesman Yahya Saree said in a statement read out on the rebels’ Al Masirah TV.

“We have the right to strike back in retaliation to the air strikes and the targeting of our civilians for the last five years.”

According to Saudi interior ministry spokesperson, the blazes at the facilities in Abqaiq – home to the company’s largest oil processing plant – and Khurais were under control.

“At 4.00am (01:00 GMT) the industrial security teams of Aramco started dealing with fires at two of its facilities in Abqaiq and Khurais as a result of … drones,” it said.