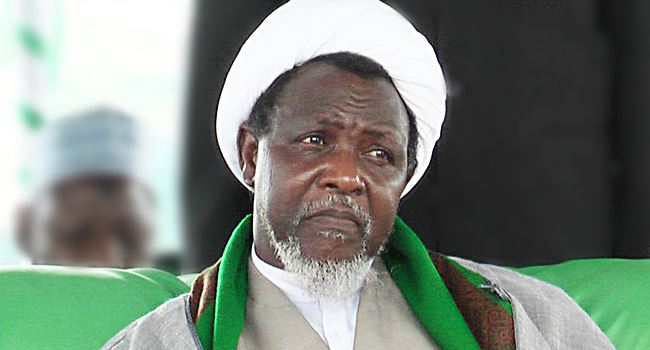 The leader of the Islamic Movement in Nigeria (IMN), Sheikh Ibraheem el- Zakzaky and wife, Zeenah, will know their fates (today) Wednesday as the Kaduna State High Court rules on their no-case submission presented to Justice Gideon Kurada by his lead counsel, Femi Falana
(SAN).

At the last sitting of the court held on July 1, 2021, Falana had prayed the court to rule in favour of his clients who have been in detention for four years.

If the court rules in favour of El-Zakzaky and wife, then the Sheikh and his wife will be set free after they have been incarcerated since December 2015.

Confirming the development in a press statement on Wednesday made available to Ripples Nigeria, the President, Media Forum of the Islamic Movement, Ibraheem Musa, said:

“The Kaduna State High Court is expected to pass judgement on the no-case-submission prayer presented by the lead counsel to Sheikh Ibraheem el’Zakzaky, Mr Femi Falana SAN, in which he argued that even though the prosecution called 15 witnesses, none of them was able to establish any connection between the alleged crimes and Sheikh Zakzaky.

“The Islamic Movement in Nigeria is patiently waiting for the establishment of ‘No case submission’ on the flimsy charges filed against Sheikh Ibrahim el-Zakzaky and his wife by the Kaduna State government today.

“For those who may have forgotten, the December 12, 2015, ‘Zaria Massacre’ which was carried out by the Nigerian Army under the pretext of blocking the road to the then Chief of Army Staff, Tukur Buratai.

“That was the claim and propaganda used to deceive the majority gullible Nigerian public.

“However, immediately after the court verdict passed by Justice Kolawole in Abuja, the Kaduna State Government, through its Attorney and Commissioner for Justice, filed charges against Sheikh el-Zakzaky and his wife which among others include abetment to culpable homicide.

“This is contradictory and antithetical to their earlier claims and propaganda that Army Chief’s road was blocked by IMN members.

“Therefore, it will interest you to note that all the charges levelled against Sheikh el-Zakzaky were the same charges filed against the over 200 IMN members prosecuted by the Kaduna State government before the state high courts, which eventually discharged and acquitted all the defendants.

“Hence our case today is a call and reminder to the general public and particularly the people of conscience in the world of humanity, equity, and natural justice that we have preserved and endured enough over the incarceration of our leader.

“We have tolerated enough but we are grateful to Almighty Allah for giving us the strength, morale, and courage to withstand the prosecution and all sorts of oppressive and repressive powers exerted upon us by this government as He spares all our lives to witness the end of this case.

“Nigerian citizens and the people of conscience all over the world are keenly and patiently watching the trend of events as they unfold regarding this case.

“We are very much confident that the court will be left with no option but to do justice, paving the way for yet another victory for us and humanity in general.”

Nnamdi Kanu an empty head, does not understand the concept of Biafra —Asari-Dokubo