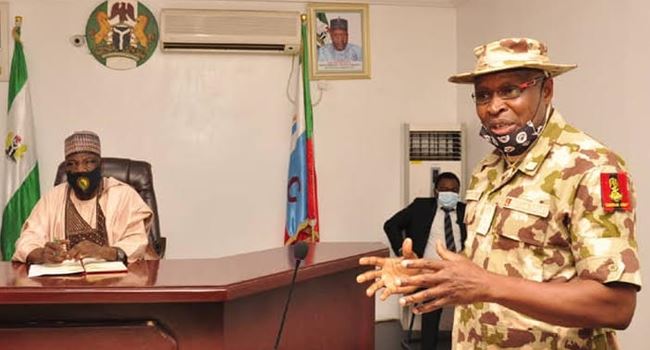 In the spirit of fairness and equity, the Federal Government has been called upon to accord same attention and amnesty granted to repentant Boko Haram militants, ISWAP fighters and other bandits be given to victims of insurgency who also need some degree of succor having lost their children, wives, husbands and relatives as well as hard earned properties.

The call was made by the Deputy Governor of Gombe State, Dr. Manasseh Daniel Jatau when the new Coordinator of Operation Safe Corridor, Brigadier General Joel Maina, paid him a courtesy call in his office on Friday.

He said, “the task ahead of you is a daunting task because it is not easy to get the society to buy into the DRR Programme of the culprit, whereas the victims, to a large extent, remain unidentified, uncared for, and un-rehabilitated” .

While appreciating the sacrifices of the Nigerian Army and other security agencies as well as successes recorded in the fight against insurgency, the Deputy Governor challenged the administrators of Operation Safe Corridor to brace-up for the challenges associated with the Deradicalization, Rehabilitation and Reintegration of repentant insurgents.

He said that Gombe State has played a significant role by making numerous sacrifices to maintain peace and security in the North East subregion stressing that the state has been relatively peaceful due to the proactive approach of the Inuwa Yahaya led APC administration.

According to the Deputy Governor,
“therein lies the dilemma confronting you as actors and those to implement. I trust your professional calling to overcome this challenge that has been a subject of debate among our legislators at the National Assembly” .

“I urge you to conduct your program as required, and having witnessed a graduation ceremony, there is the compelling need to have more social Psychologists and Sociologists who specializes in deviant behavior”, he stressed.

Jatau also urged the Operation Safe Corridor to embark on Corporate Social Responsibility to the limit of the resources available to the immediate community.

He noted that the administration of Governor Inuwa Yahaya was ensuring that nobody in the state is left in the struggle to overcome the numerous challenges militating against the development of the state, Northeast and Nigeria at large.

He also said that, in the face of insurgency, citizens have witnessed untold hardship, but expressing delight over the good news of insurgents turning around to denounce their activities, thereby creating the need for the establishment of operation safe corridor.

He explained that the state has, in spite of its inconvenience, offered the NYSC Orientation Camp as a temporary base and as its own contributions to ensuring the success of the program for the benefit of all

Speaking earlier, the Coordinator, Operation Safe Corridor, Brigadier General Joel Maina, told the Deputy Governor that Operation Safe Corridor was initiated and started six years ago by the federal government to encourage no-risk repentant and willing Ex-Boko Haram and ISWAP members to be reintegrated in to the society and be able to live a normal life.

He also said that in a bid to explore the non kinetic aspect in support of the kinetic operations of soldiers in the northeast, seventeen agencies including the Army are drawn to participate in the Deradicalization, Rehabilitation, and Reintegration exercise.

The Operation Safe Corridor Coordinator explained that the process begins with screening and documentation of the clients, followed by removing the wrong ideologies, and then train them on skills acquisition.

Thereafter according to him, the Reintegration, which is expected to be done by their states of origin will follow and the repentant people will be assisted to become good citizens.

The Federal Government has been implementing a De-redicalization, Rehabilitation and Reintegration (DRR) programme under Operation Safe Corridor for repentant fighters of boko haram and ISWAP at the Gombe State NYSC Orientation Camp for the past six years.