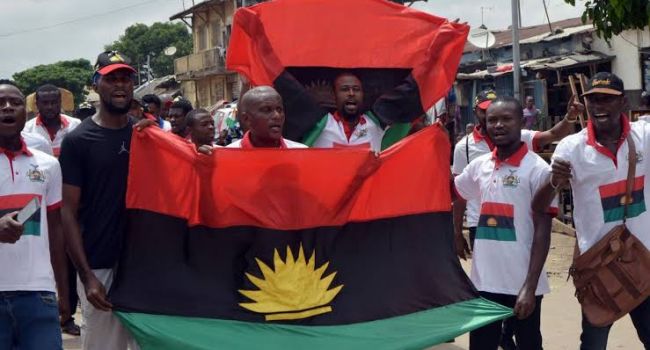 Outlawed Igbo separatist group, the Indigenous People of Biafra (IPOB), has fingered top politicians in Imo state including Governor Hope Uzodinma, former Governor Rochas Okorocha, Senator Ifeanyi Ararume, Emeka Ihedioha, and other top political and traditional leaders as being behind the insecurity in the state.

The Biafra agitators, in a statement on
Friday by its Media and Publicity Secretary, Emma Powerful, also alleged that the desperation of the political elite of the state was behind the insecurity not only in Imo but in other South-Eastern states, warning them to make peace among themselves in order to stop the killing of the people for the political interest of the states.

“This disheartening insecurity is the handwork of some traitors and renegades who see politics as a career job and we have discovered how they recruited external aggressors whom they use to murder their people and target political opponents at will,” the IPOB statement said.

“This problem is lingering in the region and particularly in Imo state and has spilled over to some parts of Anambra State and the rest of the South-East because of political reasons and interests.

“IPOB wishes to state unequivocally that our intelligence unit, the M.Branch, has unraveled those masterminds and sponsors of these atrocities and genocidal attacks going on in the entire territory of Biafra since almost two years now.

“The fact remains that IPOB and ESN are not behind the insecurity in the Eastern region because we cannot shed innocent blood of a fellow Igbo person or Biafra citizens.

“It is regrettable that politicians like Hope Uzodinma, Emeka Ihedioha, Senator Ifeanyi Ararume, Rochas Okorocha, Engr. Emmanuel Iwuanyanya, Archbishop Anthony Obinna and many others, including traditional rulers are the ones fuelling insecurity because they have refused to embrace peace.

“Imo State is home base of these renegades and traitors who are doing these heinous crimes against humanity and blame it on peaceful movement seeking freedom of our people.

“IPOB shall, very soon, mention and expose the names of foot soldiers and criminals they are using for these evil acts so that the general public will know who are behind their misery and the harvest of innocent blood in Imo State.

“The politicians behind this devilish activities thinking that nobody will know them and expose them should retrace their steps because it will bounce on them shortly,” Powerful stated.

‘Only I can defend interest of Ndi Igbo, others’, Wike boasts