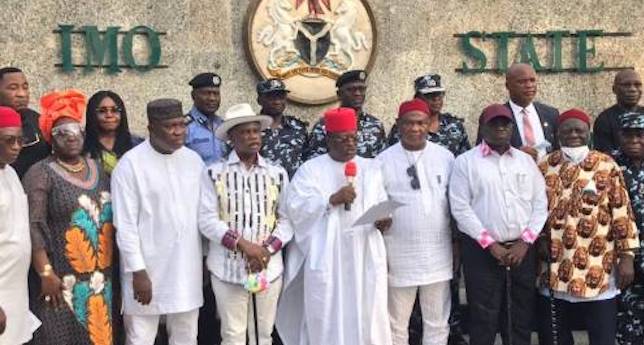 Governors of the five states in the South-East on Sunday agreed to establish a joint security outfit codenamed EBUBEAGU.

The governors, according to a statement posted by the Imo State government on its Twitter handle, took the decision at a security meeting held in Owerri, the state capital.

Also at the meeting were commanders from the Nigerian Navy, Nigerian Air Force Commanders, the Inspector-General of Police, Usman Alkali Baba representatives of apex Igbo socio-political organization, Ohanaeze Ndigbo, and other stakeholders.

READ ALSO: ESN is a brainchild of South-East governors hijacked by IPOB —Uzodinma

The governors’ decision to establish the security network came a few days after gunmen attacked the Owerri Custodial Centre in Imo State and freed 1,844 inmates.

The hoodlums also attacked the headquarters of Imo State police command and wreaked havoc on the facility.