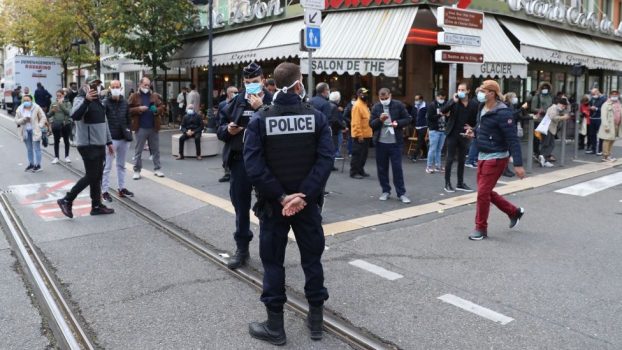 A yet-to-be identified knifeman has been arrested in Saudi Arabia after stabbing a guard stationed in front of the French consulate Jeddah.

According to reports, the assailant was arrested after stabbing and injuring the guard with a ‘sharp tool’ at the French consulate in Jeddah on Thursday.

France’s embassy in Riyadh said the guard was taken to hospital and his life is not in danger, but condemned the ‘attack on diplomatic premises which can never be justified’.

French diplomats also called on Saudi authorities to ‘shed light on this attack’ and ensure the safety of French people in the kingdom, where France has an embassy in Riyadh, an honorary consulate in Al-Khobar and French international schools.

READ ALSO: France cautions its citizens in Muslim countries to watch out for backlash

‘We call on our compatriots in Saudi Arabia to show maximum vigilance,’ the embassy said after Saudi security forces apprehended the suspect, who is said to be a Saudi national in his 40s.

This came hours a knifeman killed at least three people and wounded several others at a church in the city of Nice which the city’s mayor described as an act of “terrorism”.

Moments after the attack, Mayor Christian Estrosi said on Twitter that the attacker had been detained. French media said the suspect was in hospital.

Estrosi said one of the victims was killed in “horrible” way, “like the professor” – an apparent reference to the attack on French teacher Samuel Paty, who was beheaded in broad daylight earlier this month.

French Prime Minister Jean Castex revealed that the incident forced French authorities to raise the security alert in the country to the highest level, minutes after the knife attack in the city of Nice.

Related Topics:FranceKnifemanSaudi Arabia
Up Next