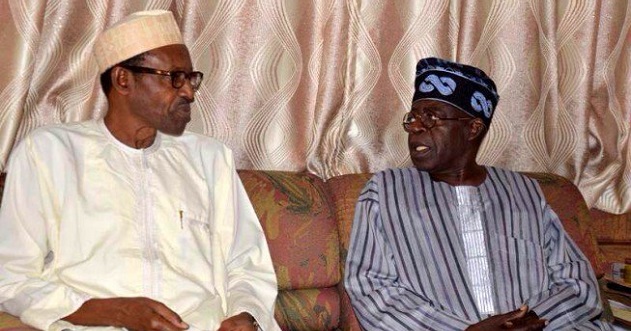 Following the political intrigues playing out in the Lagos chapter of the All Progressives Congress (APC) President Muhammadu Buhari on Monday had a closed door meeting with the party’s national leader, Senator Bola Tinubu.

The meeting which the duo had at the Presidential Villa Abuja came hours before the APC governorship primaries for Lagos State which is slated to hold today (Tuesday).

There are fears that the Lago State governorship primary if not well handled may create crisis for the ruling party in the state.

Tinubu and many chieftains of the party in the state have openly rejected Governor Ambode and are seriously selling Babajide Sanwo-Olu, their preferred choice for the party’s governorship ticket to their teeming members, who are to select the party’s candidate through direct primary.

But in a frantic effort to secure the ticket to run for a second term in office, Ambode had attacked his opponent, describing him as a misfit, and alleging that he was once caught using fake dollars in the United States and had once gone for rehabilitation in a Lagos hospital.

What Tinubu and Buhari discussed during their meeting on Monday was not made public but it was learnt that the President had expressed concerns over the development in Lagos and the effect it might have on the APC at the 2019 general election.

It was however gathered that the APC national leader and former Lagos State governor, had assured him that negative fallouts from the moves to stop a second term for Ambode would in no way affect the party’s chances in the 2019 presidential election.

It was initially rumoured that Ambode was going to be part of the meeting, however, the embattled governor, it was learnt, was nowhere near Abuja on Monday.