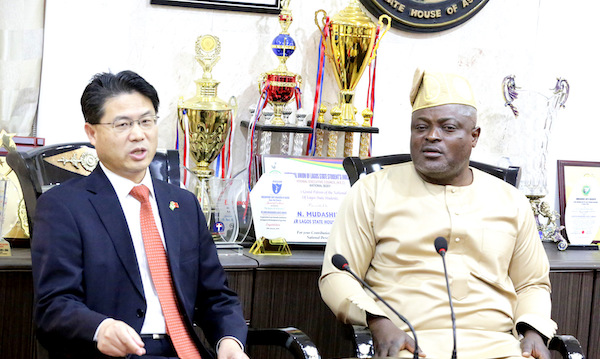 Speaker of the Lagos state House of Assembly, Mudashiru Obasa, has urged the government of China to increase its investments in Lagos.

While receiving the Chinese envoy led by the country’s Consular General in Lagos, Chao Xiaoliang, the speaker also called for more cooperation between Nigeria and China.

During the meeting which held at the speaker’s office in the Lagos state House of Assembly, Obasa lauded the Chinese government for establishing and sustaining mutual cooperation between it and Nigeria.

Obasa said: “I know that having such cooperation between the Lagos state House of Assembly, Nigeria and the government of China and its parliament is something that would be mutually beneficial. It will particularly be beneficial to us in Lagos state.”

He urged the Chinese government to take advantage of the many opportunities offered by Lagos for such mutually beneficial goals.

Consular General Xiaoliang, on his part, commended the Lagos government for supporting and protecting the country’s businesses and nationals resident in the state.

Xiaoliang, said: “I came to Lagos at the end of May, which is a very important time between the Chinese government and other countries.”

Release our leader! Shi’ites react to proscription order, give condition to stop protests