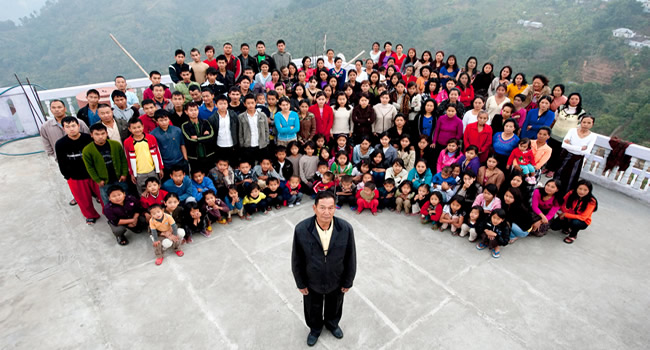 A 76-year-old Indian man, Ziona Chana, believed to head the world’s largest family with 38 wives, 89 children and 36 grandchildren, has died in the state of Mizoram.

Chana, who was the head of a religious sect that practised and encouraged polygamy, reportedly died on June 13, after suffering diabetes and hypertension.

His death was confirmed by Mizoram’s chief minister, Zoramthanga, who offered his condolences on Twitter “with a heavy heart”.

Though the exact size of Chana’s family has been a subject of various debate, other reports had claimed he had 39 wives, 94 children, 33 grandchildren and one great-grandchild, which adds up to 181 people.

Chana’s extrordinary life has grabbed several headlines over the years.

The enormous family lives together in a four-storied house called “Chuuar Than Run” or New Generation House, with 100 rooms. His wives share a dormitory near Chana’s private bedroom, according to local media.

The family belongs to a sect known as Chana Pawl, that has about 2,000 followers. They all live around Chana’s house in Baktawng Tlangnuam, about 55km (34 miles) from Mizoram’s capital, Aizawl, and was founded by Chana’s grandfather in 1942.

Related Topics:deathfamilyIndiaPolygamySectZiona Chana
Up Next