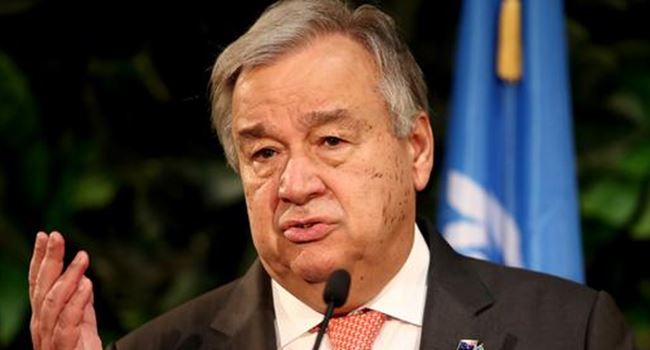 The United Nations Secretary-General, António Guterres has been re-elected for a second term as head of the global body.

He was nominated by his country, Portugal, and appointed by acclamation of the General Assembly, following prior endorsement by the UN Security Council for a second term that will run from January 1, 2022 to December 31, 2026.

Guteress, who took the oath of office in the General Assembly Hall, UN headquarters on Friday, said he was aware of the immense responsibilities bestowed on him at this critical moment in history.

He said: “We are truly at a crossroads, with consequential choices before us; paradigms are shifting, old orthodoxies are being flipped.

“We are writing our own history with the choices we make right now.

“It can go either way: breakdown and perpetual crisis or breakthrough and prospect of a greener, safer and better future for all. There are reasons to be hopeful.”

Guterres detailed how COVID-19 had taken lives and livelihoods, while exposing inequalities.

“At the same time, countries are confronting challenges such as climate change and biodiversity loss,’’ he added.

Related Topics:GuterresUN chief
Up Next