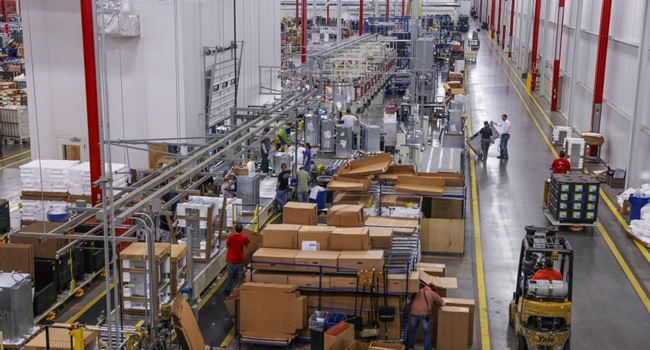 Manufacturers in Nigeria say 38% of their operating costs goes to generating alternative electricity just as their stockpile of unsold goods rocketed to a historic high of N402.4 billion as consumer spending in Africa’s biggest economy plunges and patronage hits new lows in the aftermath of the pandemic outbreak.

It lends credence to “the reality that the disposable income of the consumers has been grossly eroded,” Mansur Ahmed, president of the Manufacturers Association of Nigeria (MAN), told reporters in Lagos on Thursday at the 48th Annual General Meeting of the association.

Inflation in has been touching alarming levels in Nigeria for months on end, hitting a 27-month high 12.82% in July after rising without relenting for 11 consecutive months, the statistics office said in its July’s inflation report.

On Thursday, government announced a total ban on all food items and fertiliser apparently in a dramatic move to save salvage Nigeria’s fast-depleting dollar reserves from hitting the point of disaster, few days after a record hike in petrol pump price was announced and electricity tariffs were raised also to levels not seen before.

The three actions are in themselves capable of catapulting Nigeria to hyper-inflation in the months ahead, given their significance to survival.

Nigeria’s import-oriented economy shrank by 6.1% in the second quarter, hobbled by the double whammy of the COVID-19 outbreak and record plunge in the prices of oil, which provides around 90% of the country’s foreign exchange earnings.

Analysts say a recession is round the corner if the economy contracts further this quarter.

Ahmed added that the coronavirus crisis almost triggered the shutdown of eight subsectors in the Nigerian manufacturing industry.

He said manufacturers are facing hell in sourcing foreign exchange to import raw materials and spares that are not within reach in Nigeria.

“The dwindling manufacturing performance was substantiated by capacity utilisation in the sector which slowed to 56.8 per cent in 2019 from 57.8 per cent achieved in 2018,” Ahmed said.