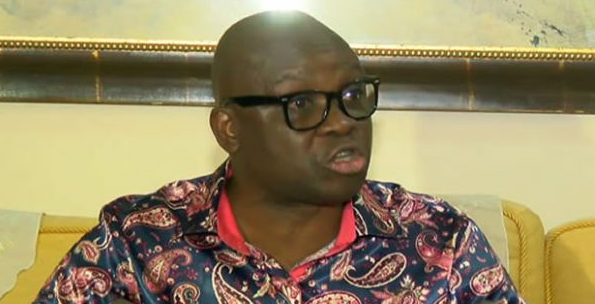 Ekiti State Governor Ayodele Fayose has described Justice Okon Abang of the Federal High Court as a disgrace to the judiciary in Nigeria.

He said that the judge was acting more like a persecutor in the case of former National Publicity Secretary of the Peoples Democratic Party (PDP), Chief Olisa Metuh.
According to Fayose, Justice Abang ridiculed Nigeria by causing an accused to be brought to court on a stretcher.

The Ekiti State governor and chairman of the PDP Governors’ Forum, was reacting to the scenario were Metuh was brought to court on a stretcher on Monday after Justice Abang had earlier threatened to send him back to prision if he fails to appear in court that Monday.

Metuh is facing trial for allegedly receiving N400 million from the Office of the National Security Adviser in 2014.

Fayose in a statement issued on Tuesday by his Special Assistant on Public Communications and New Media, Lere OIayinka, said that it was clear that Justice Abang was out to satisfy the sinister aim of Metuh’s persecutors.

“In saner climes, all that is needed as proof of inability to stand trial due to ill health is a doctor report from duly recognized health institution and one wonders whether medical report from Federal Government owned Nnamdi Azikiwe University Teaching Hospital, Nnewi, Anambra State should not have been enough to convince Justice Abang that Metuh was indeed sick.

“Shame on Abang, a judge who goes to court robing himself in garment of corruption. Why didn’t he (Abang) dock Metuh with the stretcher on which he was brought to court yesterday despite all his initial bragging?

“The judge’s utterances during last month’s court appearance when he was told that Metuh was on admission and could not appear in court was a clear demonstration of malice and desperation to convict an accused person at all cost.”

The governor said it was obvious that Justice Abang’s only aim was to satisfy the interest of those with evidence of his corrupt practices, adding that; “When they needed the Code of Conduct Tribunal (CCT) chairman, Danladi Umar to help them convict Senate President Bukola Saraki, they made the Economic and Financial Crimes Commission (EFCC) to clear him of culpability in the N10 million bribery allegation levelled against him.

“In April 2016, the EFCC said via a letter signed by the Secretary of the Commission, Emmanuel Adegboyega Aremo, that ‘after investigating the case for some time, it became clear that the whole allegation bordered in the realm of mere suspicion and would be difficult to charge the CCT judge to court based on the allegation.’

“Today, the same Umar that they cleared has been charged to court by the EFCC on the same allegation.

“Obviously, they intend to use the criminal charges filed against the CCT chairman to blackmail him into doing their sinister bidding of convicting Senator Saraki at all cost just as they are doing in the case of Metuh.

“On August 18, 2016, five Appeal Court justices in their judgment in the case of Abia State Governor, Okezie Ikpeazu Vs. Samson Ogah, said Justice Abang committed a rape on democracy!

“Also, a three-member panel of Appeal Court judges led by Justice Ibrahim Salauwa said the judgement delivered by Justice Abang on October 14, 2016 was as ‘fraudulent as it was violent’ and that the judge acted like Father Christmas.

“If not because of his ability to do hatchet jobs for those presently holding Nigeria at the jugular, how can a judge like Abang that has been adjudged severally as giving fraudulent judgments and acting like Father Christmas still sit in judgment over cases involving Nigerians?”