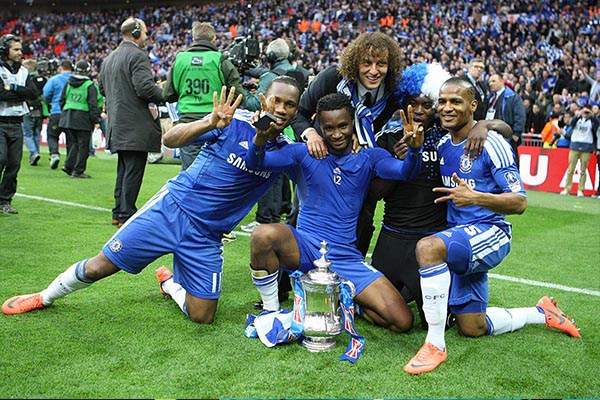 Super Eagles captain, John Obi Mikel is rooting for Chelsea as the Blues face Manchester United on Saturday for a chance to clinch their eighth FA Cup title.

Chelsea face United in the English FA Cup final at Wembley for the third time this weekend.

The Tianjin Teda midfielder is looking to see his former club nick their first title this season.

“Wanted to wish @ChelseaFC all the best for tomorrow. Go and get another @EmiratesFACup!” Mikel tweeted on Friday with a picture of himself and Chelsea teammates celebrating with the FA Cup trophy.

With Chelsea, Mikel won the FA Cup first in 2007 when Chelsea defeated Manchester United 1-0, then in 2009 when the Blues edged Eveton 2-1 in the final, and in 2010 and 2012 when they edged Portsmouth and Liverpool respectively to lift the trophy.

Mikel made 374 appearances for the Blues during his 11-year spell at the club.

Currently with Chinese Super League side, Tianjin TEDA, Mikel has made 11 appearances, scoring one goal and providing two assists this season.