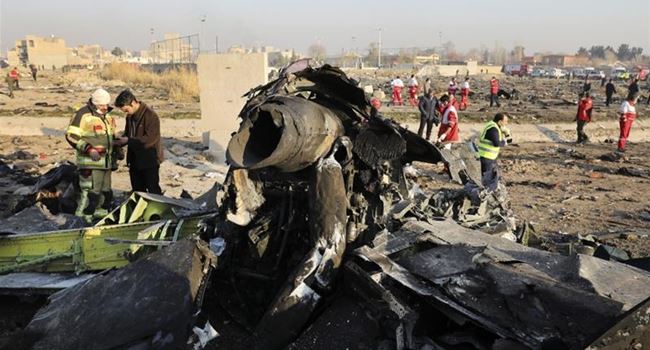 A new video showing how two missiles fired by Iranian forces hit a Ukrainian passenger plane over Iran’s capital, Tehran, killing all 176 passengers and crew on board, has surfaced.

The security camera footage which has been verified by The New York Times shows the moment two missiles were fired 30 seconds apart causing the plane to crash killing 176 people onboard.

The newspaper on Wednesday said that the first strike disabled the plane’s transponder before it was hit by the second missile with the plane flying for several minutes, on fire, before crashing to the ground and exploding.

The latest development comes after Ukraine and other countries whose nationals were in the shutdown plane belonging to Ukraine International Airlines, are considering suing the middle eastern country.

This was disclosed by Ukraine’s Foreign Minister, Vadym Prystaiko, who added that the grieving countries would gather for a meeting on Thursday in London to discuss possible legal action against Iran.

It would be recalled that the flight from Tehran to Kiev crashed shortly after takeoff, killing all the 176 people on board, 80 of whom were Iranians.

Though Iran first denied complicity in the crashing of the plane, it later admitted that it was shot down mistakenly.