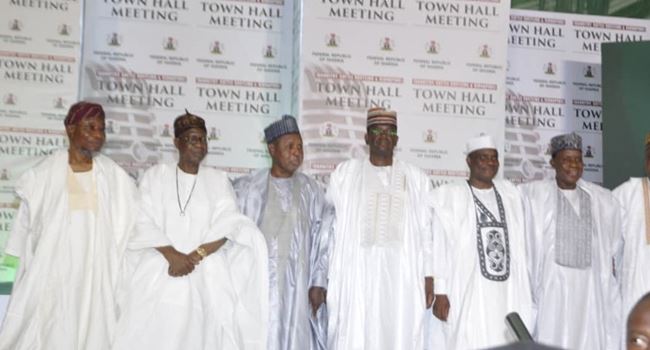 The Minister of Information and Culture, Alhaji Lai Mohammed, has said that the Government of Nigeria does not play politics with the security and welfare of its citizens.

A statement released by Segun Adeyemi, special assistant to the president (media), office of the Minister Of Information and Culture, quoted Mohammed to have stated this when he spoke in Katsina on Tuesday, at a special town hall meeting on security (banditry, cattle rustling and kidnapping).

Mohammed said, “Today’s town hall meeting is very unique. Since we started in 2016, this is the first time that we are having governors from the APC and the PDP as panelists.

”This is first a testimony to the fact that this Federal Government does not play politics with the security and welfare of citizens and, secondly, a reflection of the patriotism, commitment and nationalism of the Governors, irrespective of their party affiliations.”

The event had in attendance the PDP governors of Sokoto and Zamfara, Alhaji Aminu Waziri Tambuwal and Alhaji Bello Matawalle respectively, as well as the host governor, Aminu Bello Masari of the APC.

Mohammed said even though a lot of successes have been recorded in tackling the unique security challenges in the North West, such efforts have not been receiving much publicity in the media.

“Unfortunately, the progress that has been made in combating banditry, cattle rustling and kidnapping has not made the kind of headlines that the security challenges were making at their peak. It has therefore become imperative for the Federal Government, working with the affected states, to provide a platform for the Governors of the front-line states to highlight the successes they have achieved in their various states in tackling these cases of insecurity, as well as for relevant Federal Government Ministers to highlight the efforts that have helped to drastically reduce the level of insecurity in the North West,” he said.

READ ALSO: ABA: Abandoned or neglected? 40 images of a city in decay

In his remarks, Maj.-Gen. Magashi (Rtd) said three of the nine special military operations in the country are concentrated in the North West, in order to most effectively tackle the security challenges in the region.

Also speaking, the Minister of Interior, Ogbeni Aregbesola, said 6,000 personnel of the Nigerian Security and Civil Defence Corps are currently operating in the North West, with six hundred of them deployed as Agro Rangers to tackle farmers-herders clashes.

The participants were said to have at the event reached a consensus that there has been improvement in the security situation in the North West.