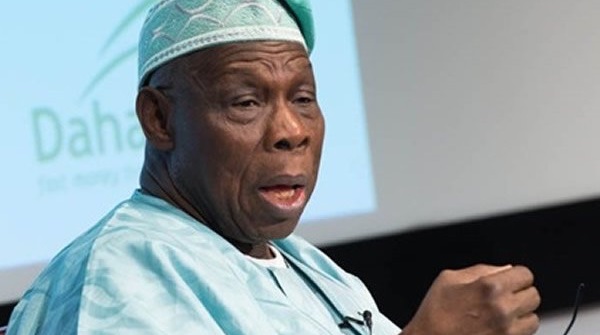 Obasanjo has been in the news lately for criticising President Buhari’s leadership, claiming the country was becoming a failing state.

The presidency had also reacted to his criticism, branding him a “Divider-in-Chief”.

Obasanjo, who addressed journalists when the Freelance and Independent Broadcasters Association of Nigeria (FIBAN) visited him at the Olusegun Obasanjo Presidential Library (OOPL) in Abeokuta, also thanked some African leaders including past and present ones for supporting Adesina’s re-election as AfDB president.

He added that education played a vital role in the success recorded by the former minister of agriculture and other Nigerians doing the country proud in their various fields.

The ex-president said: “I must commend the Federal government for the support given to Adesina to get this second term ticket. You know that the former President, Goodluck Jonathan recommended him before this new government came on board. The government could have rejected him. So, I must commend the president for supporting him all through.

READ ALSO: Why I backed Adesina as AfDB president —Buhari

“Also, let me acknowledged and commended some of my colleagues, the 14 former presidents in Africa for joining me immediately I drew their attention to it. Some present presidents also deserved commendations too.

“If Adesina had not gone to school, no matter the innate ability God might have given him, he would not have got to where he is today.

“So, the first thing is how do we get about 14million children, who are out of school now back to school. 14million children who should have been in school, undergoing education training that will make them contribute to the development of the country in the near future.

“It is having good education that will make them a good product to market in the global world like Adesina. Not only him, but we also have several others like him, including the AFRISM President, Dr. Oramah”.