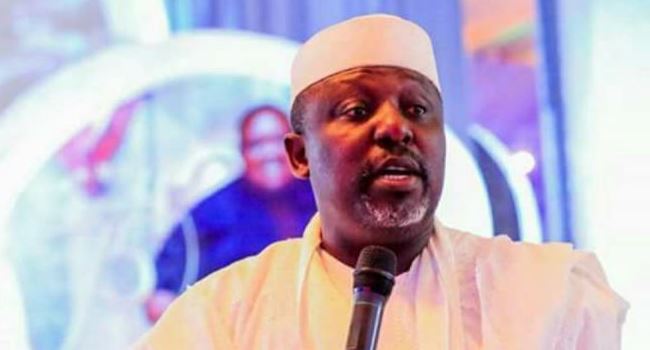 Former governor of Imo State and senator-elect for Imo West senatorial seat, Rochas Okorocha, has reacted to a photo trending on social media, which showed him holding a certificate of return.

The governor described the photo as fake and lamented that the Independent National Electoral Commission (INEC) had yet to issue him his certificate of return.

A statement by his media aide, Sam Onwuemedo said: “The attention of the former governor of lmo State, His Excellency Owelle Rochas Okorocha, has been drawn to fake photo news showing where he is holding what appears like a certificate purportedly issued to him by INEC.

“The photograph in question expectedly has been trending on social media. And we have been receiving calls from well-meaning Nigerians to that effect, either congratulating the former governor or to confirm the authenticity of the photo news.

“The truth is that the photograph is fake and didn’t emanate from us. On our side, we don’t engage in awkward actions. When the former governor and the senator-elect for Imo West senatorial District receives his certificate of return, we will duly inform the general public.”

INEC had initially refused to give Okorocha his certificate of return owing to claims by the returning officer for Imo West senatorial election that he declared Okorocha winner under duress.

The governor had run to court to challenge INEC’s decision and a Federal High Court in Abuja ruling on the matter, last Friday ordered the electoral body to issue certificate of return to Okorocha, as the duly elected senator to represent Imo West senatorial district.