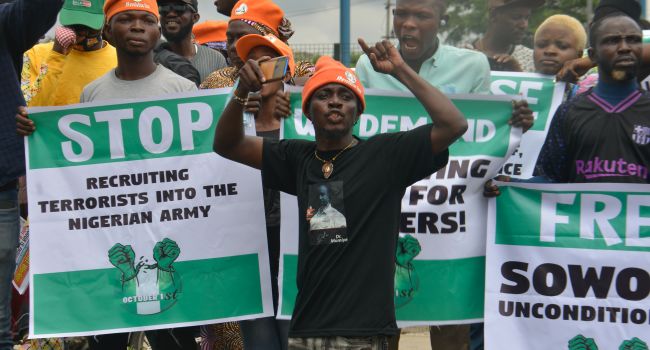 Election season in Nigeria is an interesting time. It is, expectedly, characterised by heated contestations and conversations that are inherently partisan.

It is also often marked by events that expose the fragility of the country.

The 2023 general elections is about six months ahead. In the build up, politicking is already gathering momentum.

One of the topics most debated is the state and fate of the impending democratic transition amid the deteriorating national security situation.

Terrorists, bandits and other violent non-state agents have taken over swathes of areas in northern Nigeria. In the recent weeks, terrorists have carried out audacious attacks within the territory around the capital Abuja. Most recently personnel of the presidential brigade of guards were ambushed.

Drawing from my previous research on aspects of Nigeria’s contemporary security challenges, I have set out the policy priorities that the next president must undertake to restore national security.

I concentrate on five critical priority issues that I consider indispensable for national unity, security, stability and sustainability. These straddle the concerns of reforming the national security architecture, reclaiming the country’s vast un(der)governed spaces, addressing the material bases of insecurity, mitigating the faultlines of identity, and repositioning the counter terrorism and banditry drive.

These are all germane given the apocalyptic state of security in the country in the past six months.

Nigeria’s national security architecture is unwieldy and centralist. This means that it can’t function effectively.

The main pillars of the national security architecture are the military, the police, the paramilitary and the intelligence sectors. All are federally controlled. Their bureaucracies are marked by burdensome unitarist command and control structures. This makes them undynamic and inefficient.

Security is essentially local. This means that it requires a great deal of local goodwill, support, initiative collaboration and intelligence.

There is a need to devolve the national security system in a way that enables using community and state policing, among others.

Police and civil defence structures should be devolved in a way that ensures that state commands enjoy legislative and operational autonomy. For its part the federal government would retain jurisdiction over defence, military intelligence and customs.

The country’s vast hinterlands, forestlands, frontiers and borderlines are grossly unguarded. There are about 1,400 irregular and unmaned entry/exit routes along Nigeria’s 2,515 miles of land borderlines.

Some of these unguarded spaces have been effectively occupied and ‘governed’ by violent non-state actors. These include terrorists, insurgents, bandits, militants and armed mercenaries. All engage the state in competitive territorial contests.

There is a need to reclaim these volatile spaces through a pragmatic community-oriented security governance mechanism. This would prioritise proactive hinterland, borderland and forestland policing.

The use of drones and digital technologies would be of help. As would enlisting local vigilantes and volunteers.

Address the drivers of insecurity.

Legitimate grievances underlying conflicts should be identified and dealt with.

And the government needs to put in place a development strategy that addresses illiteracy, poverty, unemployment and inequality. The policy should focus on human security.

These factors constitute the material bases of group violence.

Contests around identity have become the albatross of national political life in Nigeria. Political elites have succeeded in exacerbating the faultlines of national diversity. This has been done through sectionalist, ethnic, clannish or religious politicking.

Politicisation of ethno-communal cleavages and differences has been a prime driver and catalyst of violent conflict. The current uproar associated with the same-faith presidential ticket of the ruling All Progressives Party underscores this.

Care must be taken to ensure that the delicate issues in inter-group relations are identified and amicably resolved. Inclusive citizenship should be mainstreamed by ensuring that all citizens and groups are treated equally.

Ongoing counter-terror operations in Nigeria have not been effective.

Terrorists and bandits have become audacious. They are increasingly engaging government in daring armed confrontations.

The government forces appear to have been overwhelmed by the dynamics of the ongoing violence amid their failing logistics and fighting morale.

There is a need to rejig Nigeria’s counter-terrorism and banditry campaigns. This could be done by repositioning its command and strategy, promoting the welfare of the troops, as well as deploying improved tactics and logistics. One example would be the use of technology-mastered-and-driven hardware.

Also, digital capabilities should be mainstreamed for espionage, intelligence, surveillance and reconnaissance. This will ensure greater operational efficiency.

The next Nigerian president faces a daunting and onerous task. He is going to inherit and drive a state and an economy that have been fatally damaged by the adversities of strife, violence and misrule.

He is going to be grappling with the challenge of rebuilding a body politic that has been systematically compromised and infiltrated by anti-state elements such as jihadists and secessionists.

He is also going to face the challenge of reinventing a comatose state system and government, which have become mired in systemic inertia and abuse, resulting in a near fiasco of the national security.

Redeeming such a system requires a forthright and pragmatic approach that has security as its fulcrum.

OPINION: What’s behind terrorist attacks on churches in Nigeria