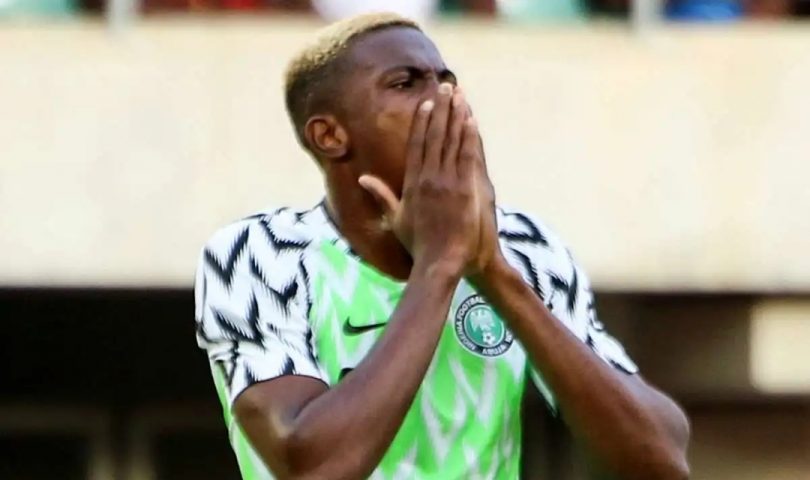 Ighalo has heaped praises on the 21-year-old Lille star, backing him to break records both in Europe where he plies his trade and in the national team.

Osimhen, formerly at Wolfsburg in Germany, has made a great start to his career in France, having scores 18 goals so far in his debut season in Lille.

The young forward has also recorded six assists in 38 appearances in all competitions for Les Dogues.

In a chat with Elegbete TV on YouTube, Ighalo shared on his relationship with Osimhen and expressed confidence that the future is bright for Nigerian football.

Read Also: Ighalo ‘waits on God’ over decision to stay at Man Utd or return to China

“I talk to Osimhen, he’s a very nice boy. He’s a good guy. We talk, not almost every day, but almost every time I advice him,” said Ighalo

“He came to watch our game against Club Brugge in Belgium because it’s closer to where he lives, he messaged me he was going to come so I gave him my jersey, and in fact he brought his own jersey for me, too.

“Osimhen is a nice boy, we’re from the same place. I love him, he’s down to earth, he’s hard working, he has a future and he has the mentality of a winner, that’s what I love about him. He has that lion’s heart.

“I love him, I just want him to keep working hard the way he’s doing, he’s going to break so many records in Europe and Nigeria.”

Ighalo retired from the Super Eagles after finishing top scorer at the 2019 Africa Cup of Nations in Egypt, where Osimhen made one appearance – in the third place match.