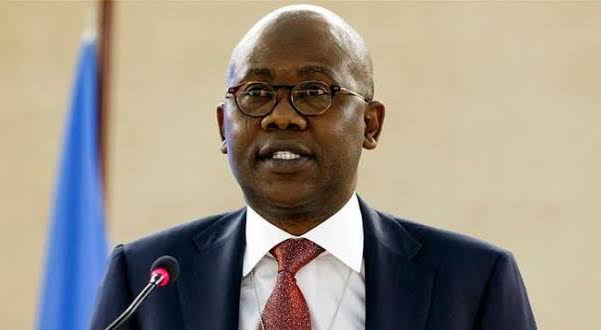 Mike Ozekhome, counsel to former Attorney General of the Federation, Mohammed Adoke, has disapproved of the detention of the ex-AGF, saying it was unnecessary.

Adoke is facing criminal charge for alleged abuse of office and money laundering in respect to the granting of the Oil Prospecting License (OPL) 245 to Shell and ENI.

The Economic and Financial Crimes Commission (EFCC) had taken the former Minister for Justice into custody upon arrival into the country on Thursday from Dubai, United Arab Emirates.

Ozekhome however said the arrest was unnecessary since he (Adoke) returned to Nigeria voluntarily. He also asked the EFCC to release his client on health grounds.

In a statement on Friday, said: “It is quite surprising, if not distressing, to behold EFCC obtaining a two-week detention order to keep Mohammed Bello Adoke, SAN in its custody. This is a man they had already charged to court since 2017, even in absentia, whilst he was in the Netherlands pursuing his masters degree in International law,” Ozekhome said.

“Adoke therefore elected to return to Nigeria voluntarily, purchasing his own ticket by himself, and signing as such, accordingly. I had issued a statement to the effect that Adoke was on his way back to Nigeria and would report to the EFCC with lawyers from my office upon his arrival.

“It was therefore a matter of great surprise that the Interpol still arrested him upon arrival and handed him over to the EFCC. Rather than the EFCC immediately arraigning him before a court based on charges already preferred against him even in absentia, it has resorted to obtaining an Ex parte order from the FCT High Court, to detain him for two weeks. We don’t want to believe that Adoke will be persecuted rather than prosecuted.

“The last time I checked, cases are first thoroughly investigated before a suspect is charged to court as has been done in the Adoke matter. Of what use is his present incarceration meant to achieve? Is it meant to subdue him? Punish him? Wear him out mentally, physically, spiritually, psychologically and psychically? Deny him justice? Subject him to public ridicule, derision, odium and obloquy?

“Is it meant to negatively put him in the public domain, try him, convict him and sentence him, through media trial? All these will neither help the course of justice,nor promote constitutional democracy, with its corollary in-built safety valves of advancing inalienable human rights and liberties as recognised by extant national, sub-regional, regional and international civil rights instruments.

“We humbly appeal to the EFCC to accord Adoke administrative bail to take care of his poor health, the very reason he had gone to Dubai. In the event that this fails, we shall immediately take legal steps to vacate this Ex parte order, with a view to protecting our client’s rights and securing his liberty.”

The EFCC stated that Adoke is facing criminal charge “for alleged abuse of office and money laundering in respect of the granting of the Oil Prospecting License (OPL) 245 to Shell and ENI”.