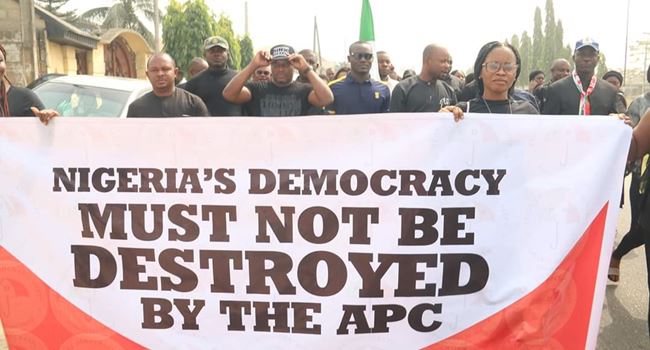 The Peoples Democratic Party (PDP) members in Imo and some other states on Sunday protested the ruling of the Supreme Court that sacked Emeka Ihedioha as the Imo State governor.

Some of them during the protest called for the dismissal of the Chief Justice of Nigeria (CJN), Tanko Muhammad.

The Supreme Court had sacked Ihedioha and declared Hope Uzodinma of the ruling All Progressives Congress (APC) as the governor of Imo State.

The ruling had been viewed as controversial by many Nigerians.

On Sunday, aggrieved members of the PDP took to the streets in Imo Abia, Taraba and Ogun states to protest the ruling, demanding that the apex court reverse its verdict on the Imo governorship election appeal.

In Imo, the protesters occupied major streets in the state capital, Owerri.

Speaking during the protest, a member of the House of Representatives, Henry Nwawuba, told newsmen: “I believe that the Supreme Court must redeem the judiciary. Since the judgment was delivered, the state has become a graveyard. This is unlike what happened when the PDP was holding sway.

“How the Supreme Court justices gave victory to a candidate who came fourth at the election remains a mystery to many of us. We call on them to revisit the Imo case and do justice.”

Maria Mbakwe, the PDP woman leader in the state, who also spoke said, “I have never seen this kind of injustice in the last 50 years that I have been living in Imo State.”

The protesters in Abia, who demonstrated peacefully in major streets in the state capital, Umuahia, made similar demand that the Supreme Court should reverse its verdict on Imo.

The PDP chairman in the state, Chief Johnson Onuigbo told newsmen, “We gather to express our anger over the Supreme Court judgment on Imo State.

“We are concerned as it is not only about Abia and Imo states, but about Nigeria and because we are Nigerians. Injury to one is injury to all.

“We are demanding that the Supreme Court reverse itself.”

It was the same scenario in Taraba and Ogun states.

READ ALSO: Like Peter Obi, Ihedioha attacked my prophecy and the consequence is there for all to see – Mbaka

Some placards displayed by the protesters in Ogun read, ‘Imo judgment is a fraud,’ ‘Tanko must go’. ‘Stop robbing the PDP of its mandate,’ and ‘Stop influencing the judiciary.’ ‘Our judicial system is not a department of the APC.’

Meanwhile, the national leadership of the party has fixed a peaceful demonstration in Abuja for today (Monday), to protest against the Supreme Court judgment on Imo governorship election.