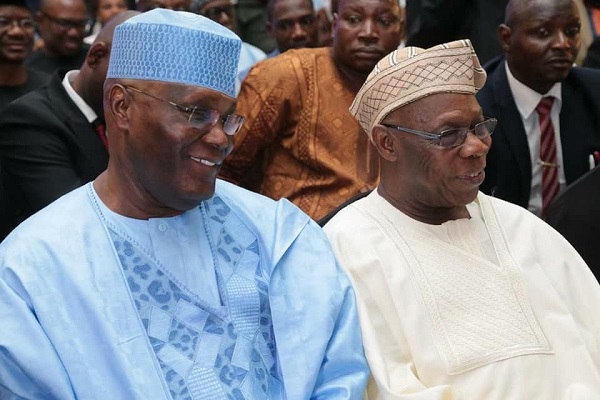 Former president, Olusegun Obasanjo, has met privately with some leaders of the Peoples Democratic Party (PDP).

Former vice president and the presidential candidate of the People’s Democratic Party, Atiku Abubakar, and Seyi Makinde had on Thursday visited Obasanjo at his residence in the Olusegun Obasanjo Presidential Library in Abeokuta.

At the meeting, the former president advised the governor-elect of Oyo State, Seyi Makinde, against running a selfish government .

According to reports, Atiku arrived the OOPL around 1:00pm and left one hour after.

Obasanjo’s media aide ,Kehinde Akinyemi who confirmed the visit, however, described the meeting as private .

However, Obasanjo spoke on the meeting in a statement issued by Akinyemi.

Some Chieftains of the PDP, including the former deputy chairman (South) of the party , Chief Olabode George, were also present at the said meeting.

Obasanjo called on the people of the state to further support the governor-elect in the onerous task ahead.

Obasanjo said, “Be transparent and embark on developmental projects, which would be a delight to the people of Oyo state.

“Please, run a government that will be making them to ask, where have this type of government been all this years in Oyo state.

“Where there is a misunderstanding, call yourselves together and make peace in the overall interest of Oyo state.

“He cannot do it alone and since you have supported him now, you should continue to be together.

“You should be mindful that Oyo people are fearless and they don’t mind whose horse is gored, that is why you are there now.”

While speaking on the meeting, the governor-elect, in a statement, said that the meeting was to appreciate and seek for wisdom from the elder statesman.

Makinde admitted that the state was in a bad shape, and as such he was taking what Baba had told them with all vigour by going to work immediately.

The statement read “He had warned against corruption and transparency. We are very much aware of this too.

“With God, Oyo state will never be the same again. This is the type of visit that will give us the needed tonic to forge ahead positively in Oyo state.”