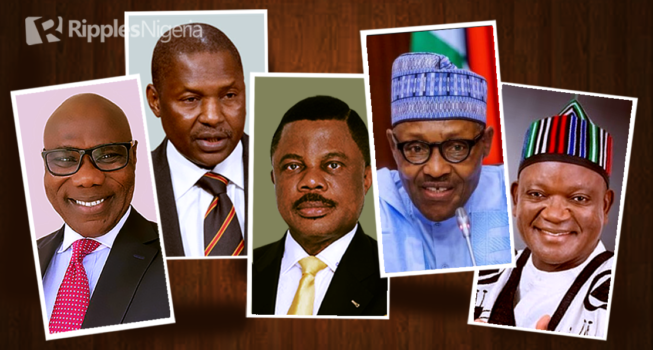 This and four other stories were among the major highlights of happenings in Nigeria in the week under review.

The EFCC on March 17 arrested former Governor Obiano at the Murtala Muhammed International Airport, Lagos, a few hours after he handed over to his successor, Prof. Charles Soludo.

Confirming the development, EFCC’s Head of Media and Publicity, Wilson Uwujaren, said: “Obiano has been on our watch list for some time now. He had immunity as a governor and that is why we could not arrest him before now.
“Today he lost his immunity and was traveling out of the country before we finally arrested him.”

The ex-governor’s arrest illustrates that every political office holder can be made to account for their actions no matter how long it takes.

Although Obiano is still assumed innocent of the corruption allegation until proven otherwise by the courts, his ordeal is a sad reminder of the level of corruption pervading Nigerian society.

No institution in Nigeria is exempted from this rot and this unfortunate scenario reinforces the call for moral rebirth across all spheres of the Nigerian society, especially among the political class who see public offices as platforms to amass wealth.

Justice Evelyn Anyadike of the Federal High Court, Umuahia, on March 18 ordered the Attorney-General of the Federation and Minister of Justice, Abubakar Malami, to delete the contentious section 84 (12) from the Electoral Act.

The judge, who gave the directive while ruling on an application on the matter, said: “Sections 66(1)(f), 107(1)(f), 137(1)(f) and 182(1)(f) of the 1999 Constitution already stipulates that government appointees seeking to contest elections are only to resign at least 30 days before the election.
“Therefore, any other law that mandates such appointees to resign or leave office at any time before that, is “unconstitutional, invalid, illegal, null and void.”

Coming from a lower court, the ruling provides another opportunity to test the laws designed to strengthen democratic institutions in the country.

Read also: QuickRead: APC leadership crisis. Four other stories we tracked and why they matter

While it also shows some form of power play between and among the nation’s ruling class, the final outcomes, which may be served by the Supreme Court, is sure to enrich the country’s jurisprudence and guarantee the rule of law as an indispensable element in nation building.

President Muhammadu Buhari on March 16 directed the All Progressives Congress (APC) Caretaker and Extraordinary Planning Committee headed by the Yobe State Governor, Mai Mala Buni, be allowed to proceed with the preparations for the party’s national convention slated for March 26.

In a letter addressed to the Chairman of the Progressives Governors’ Forum, Atiku Bagudu, the President said, among others: “All members of the governors’ forum and their followers should desist from any behaviour or utterance that will likely lead to disunity in the ranks of the party, and ultimately jeopardise the transition to the convention.

“The Mai Mala Buni-led CECC should, accordingly, be allowed to proceed with all necessary preparations to hold the convention as planned-unfailingly, on 26th March, 2022.”

Though Buhari’s intervention has somewhat lowered rising tensions in the APC, the crisis not only reminds us that contestations are an integral part of political parties but that the festering sore is essentially the result of lack of internal democracy.

Until this gap is substantially dealt with, and a greater stakeholder-mentality fostered, it may be safe to assume that the pent up anger could explode into a deeper crisis.

This is especially so as APC continues to be perceived a Special Purpose Vehicle (SPV), with several tendencies still angling for dominant positions within the ruling party.

The Peoples Democratic Party (PDP) on March 18 hinted it might throw open its presidential ticket for all interested aspirants to try their luck at the primary election slated for later in the year.

The PDP National Publicity Secretary, Debo Ologunagba, who stated this when he featured in a programme on AriseTV, said: “In line with the right of every Nigerians, anyone who is interested may pick up the forms to seek for any elective positions.
“We recognize contesting interests within the party but we want to be a melting point for Nigerians, which is why there are guidelines to everything the PDP does.”

The PDP body language suggests that the opposition party may not be favourably disposed to the idea of zoning its presidential ticket to a particular region.

Although the general mood is about power shift to the Southern part of the country, the move is largely seen as tactical for the single reason that the PDP may leverage the voting population, which weigh heavily in favour of the North, especially as primordial sentiments stay dominant in the choice of political leadership in the country.

The Benue State Governor, Samuel Ortom, on March 15 renewed his attack on President Muhammadu Buhari, saying the President lacks the capacity to rescue the country from the dwindling economy and its security challenges.

He had said: “From all indications, President Muhammadu Buhari lacks the capacity to rescue the country from the worsening economic and security predicaments confronting the nation.
“Since the inception of our country Nigerian, even before the independence, we have never witnessed this kind of nepotism and incompetence that is going on in our country.”

Ortom’s relentless attacks on Buhari now seem not to be entirely altruistic. While many concede that the federal government has not done well overall, there are concerns too that Ortom is literarily hiding behind a finger as his performance in Benue State hardly calls for any celebrations.

If anything, his jabs at the presidency appear essentially designed to help him launder a wobbly image and score cheap political points as he readies himself for a leap at a senatorial seat.

QuickRead: APC’s consensus arrangement. Four other stories we tracked and why they matter

QuickRead: APC leadership crisis. Four other stories we tracked and why they matter