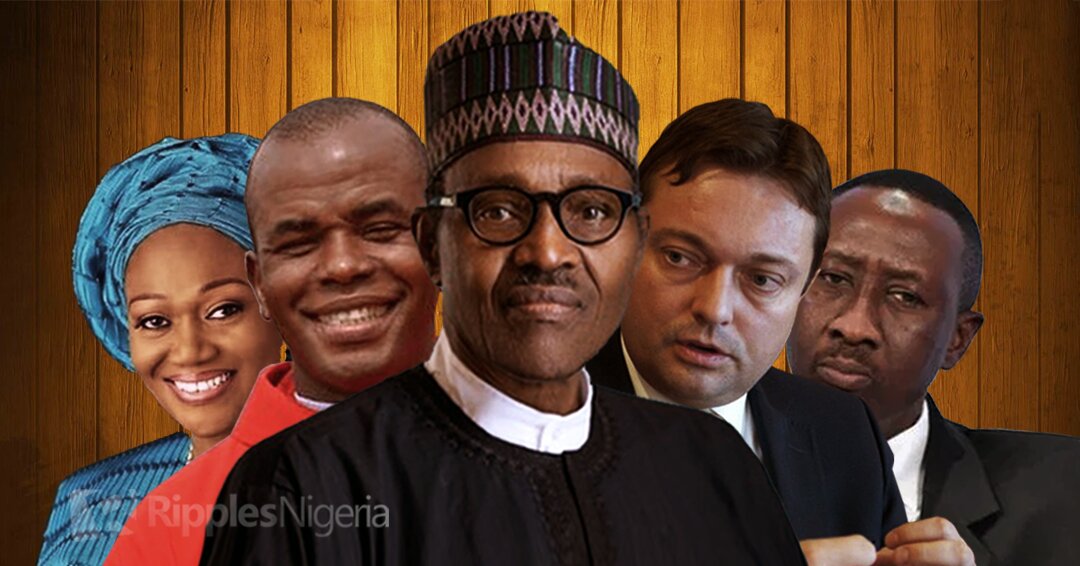 The week under review was one full of dirty fights and intrigues.

First, the Presidency decided to engage Father Ejike Mbaka in mudslinging that got Nigerians wondering what could have turned sour in the cozy relationship that existed between the Priest and the powers that be.

We also tracked three stores that made the headlines and kept Nigerians talking.

On April 30, the Nigerian Presidency took on the Spiritual Director of Adoration Ministry, Rev. Fr. Ejike Mbaka, and accused him of being bitter because he (Mbaka) was denied contracts as reward for supporting President Muhammadu Buhari in 2015 and 2019.

The Presidency, through Senior Special Assistant on Media and Publicity, Garba Shehu, in a statement, had said the priest was a blackmailer who was angry that he was not compensated.

“Father Mbaka asked for a meeting and to the shock of Presidential Aides, he came accompanied by three contractors; …and to everyone’s surprise, Father Mbaka asked for contracts as compensation for his support.
“President Buhari requested the appropriate authorities to deal with the matter in accordance with laid down rules and inside the Villa, discretion prevailed, that if those pictures and requests were made public, the followers will turn against the religious leader. None of it was released. Now, this is what is eating Father Mbaka.”

The Buhari Presidency has, through its recent utterances, shown that it is becoming increasingly intolerant of objective assessments of its performance.

By choosing to fight dirty, even in the face of its growing tendency towards blackmail, the presidency seeks to elevate intimidation as statecraft.

Read also: QuickRead: Pantami gets handshake, Uzodinma tastes terror. Three other stories we tracked and why they matter

It’s show of intolerance and impatience come as defining moments and should raise future concerns over a leadership that could resort to bullying its critics for speaking truth to power.

The saga also depicts quite clearly the growing mercantilist relationship between the church and the Nigerian state, a deliberate move to pull wool over the eyes of citizens and shut out demands for accountability and transparency.

On April 28, wife of the former Lagos State Governor, Asiwaju Bola Ahmed Tinubu, Remi, was in the eye of the storm when she attacked her colleague in the senate, Smart Adeyemi, for speaking out on the spate of insecurity across the country.

While supporting a motion sponsored by Sani Musa, a Senator from Niger State, Adeyemi, representing Kogi West, had called on the Buhari-led administration to seek foreign assistance on the insecurity challenges in the country.

“This is the worst instability we are facing. In fact, this is worse than the civil war. We shouldn’t pretend that we need foreign support now. Billions of naira has been voted for security services and nothing is coming out of it.”

However, the Lagos East Senator took exception to the call and challenged her colleague who is also a member of her party, the APC, by saying:

“Are you in PDP? Are you a wolf in sheep’s clothing?”

Remi Tinubu’s unfortunate outburst is an indication that most politicians in Nigeria see themselves, first, as loyal party members with narrow interests, rather than people with a more nationalist orientation.

Interpreted, they are mostly in the game for what they can get out of it and not what they can offer the citizens, a clear sign that most sacrifice the broader interest of the nation for greed and avarice.

Indeed, Remi’s unprovoked outburst highlights the deeper malaise hurting the war against insecurity, and this is clearly illustrated in the silly politicization of the issue along party lines.

On April 27, President Buhari called on the government of the United States to relocate the headquarters of the U.S. African Command (AFRICPM), from its base in Germany to the African continent.

In a virtual meeting with the U.S. Secretary of State, Anthony Blinken, Buhari had asked the U.S. to support Africa’s efforts in tackling the growing insecurity in the region.

“Considering the growing security challenges in West and Central Africa, Gulf of Guinea, Lake Chad region and the Sahel, weighing heavily on Africa, it underscores the need for the U.S. to consider re-locating AFRICOM Headquarters from Stuttgart, Germany, to Africa and near the Theatre of Operation.”

Buhari’s plea is a tacit admittance that
Nigeria’s long-drawn war against Islamist insurgents, herders/farmers, and surging banditry have seen a worsening trend and not abating.

The call, therefore, can be viewed as an act of desperation, though veiled, designed to communicate Nigeria’s very delicate security situation to the world.

In the face of rising criticism and calls for external intervention, the Buhari move may yet signal a readiness to welcome the intervention of military contractors (mercenaries) into the fray.

On April 30, the European Union (EU), advised the Nigerian government to explore other means, including dialogue and legal instruments, in war against insecurity in the country.

The Head of the EU Delegation to Nigeria and Economic Community of West African States (ECOWAS), Ambassador Ketil Karlsen, while speaking at a media parley ahead of the Europe Day 2021, said the level of insecurity in the Nigeria “has shown that though the military should not be foreclosed, other options, including dialogue and legal instruments, should be evolved and explored.”

EU’s call for a multi-pronged approach is one that resonates with those made by most Nigerians.

However, that this popular position has not been fully exploited speaks to the lack of political will to deal with the burning issue..

What this further highlights is the entrenchment of primordial sentiments in the conduct of state affairs.

Unless, and until, the country’s leadership weans itself of these biases, Nigerians must brace for worsening instability, a journey that might end in a failed state.

Monguno gave the assurance in a statement after a security meeting convened by the President at the State House, Abuja.
“There shall be no relenting until peace and security is significantly restored in our communities.
“Mr. President is very prepared to take profound measures in the wider interest of the people and the Nigerian nation. President Buhari is very concerned about the persisting security challenges and has no doubt that the Nigerian Security agencies will certainly overcome.

Monguno’s assurance is certainly not lost on Nigerians who have been fed with these kinds of pledges and guarantees in the last six years and at every turn, none of those promises seem to come to fruition as insecurity keeps growing at an alarming rate, spreading to every part of the country.

His measured utterances are a sad reminder to Nigerians that they may yet wait longer to see peace return to their beloved country.

And, with the Buhari administration losing more grounds in the quest to contain insurgents and bandits, the rising wave of ungoverned territories just shows how close Nigeria is to a reign of anarchy and emergence as a failed state.

For all its intent and purpose, Monguno’s assurance might just remain what it is; mere lip service, and nothing more!

QuickRead: Rumours of coup, Lai’s half truths. Three other stories we tracked and why they matter

QuickRead: Pantami gets handshake, Uzodinma tastes terror. Three other stories we tracked and why they matter