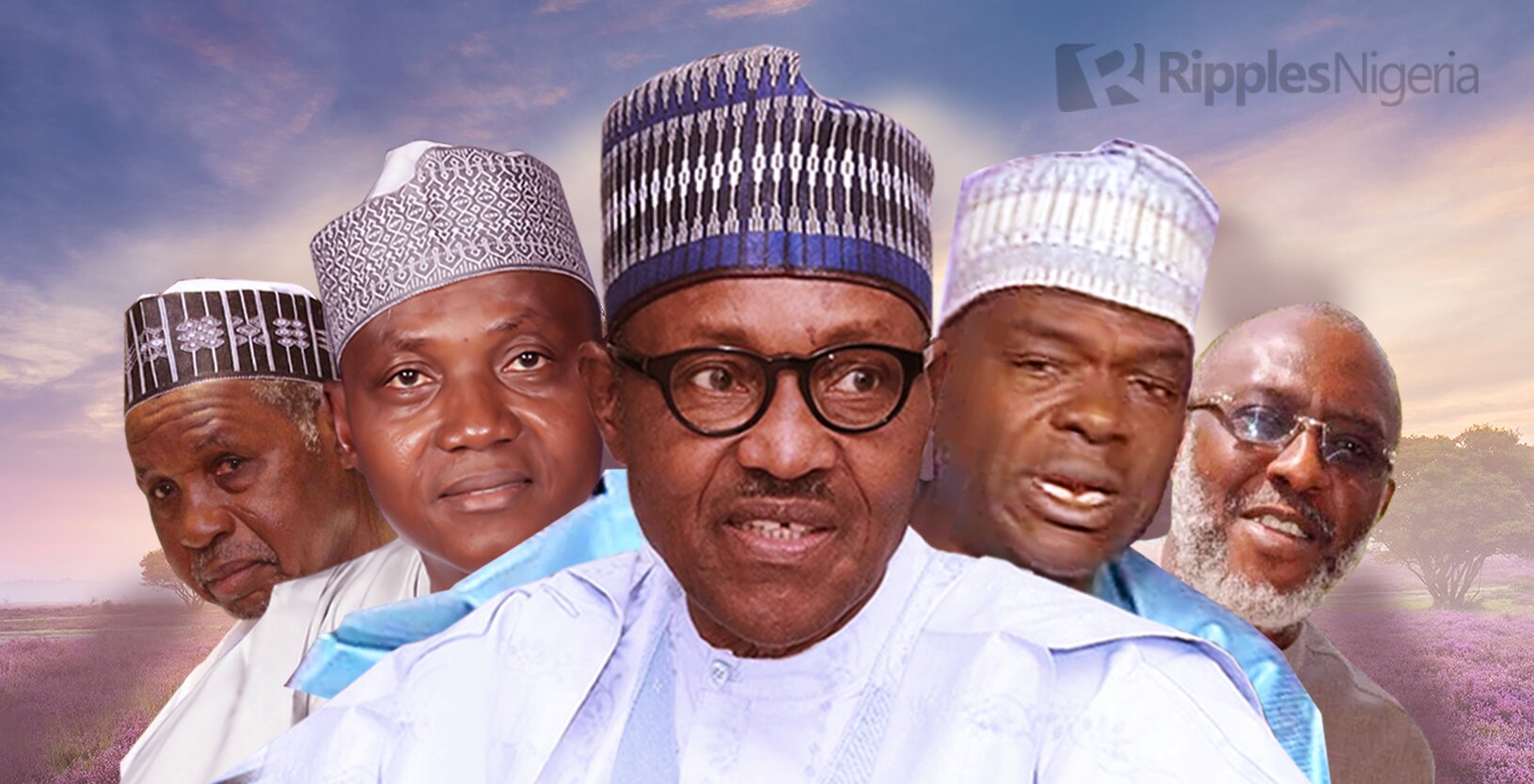 While the abduction was seen as the shame of a nation, the embarrassment it caused was compounded by claims, and counter claims, that the leadership of Fulani herdsmen in Nigeria, Miyetti Allah Cattle Breeders Association of Nigeria (MACBAN) negotiated and secured the release of the abducted students.

These and three other stories made our pick for special review. Their import for Nigeria’s nation-building efforts cannot be ignored.

In their reactions to the abduction of more than 344 schoolboys from Government Science Secondary School in Kankara Local Government Area (LGA) of Katsina State, penultimate Friday, many Nigerians described the incident as a slap on the face of President Muhammadu Buhari.

The most prominent of the commentators was Professor Wole Soyinka who, on Tuesday, December 14 said, “Beneath the dignity of a Commander-in-Chief! Well. The opportunistic homicidal respondents -Bandits/Boko Haram or whoever – thereupon picked up the gauntlet and provided a response in their own language: abduction once again of the nation’s children. They handed him (Buhari) a slap across the face, on his home terrain, taunting: See if that is more suited to your dignity.”

Why Nigerians can now heave sighs of relief following the rescue of the abducted Kankara students, the incident, however, exposes the high level of insecurity in Nigeria. It also confirms the position of many on the collapse of the country’s security architecture in the area of intelligence gathering.

That the abduction happened the day the President arrived Katsina for a private visit, has spurned conspiracy theories that the attack was deliberately carried out to rubbish government’s claims of being on top of the security challenge, and that it was delivering on its promise to secure lives and properties, a primary responsibility of any government.

Coming after similar abductions in Chibok and Dapchi schoolgirls, the event portrays Nigeria as an unserious country that never learns from experience.

That the incident came after the recent massacre of over 40 Nigerians in Zabarmari, Borno State by Boko Haram, lends more credence to why Buhari should not continue to keep the security chiefs who, from all indications, appear to have no solution to the insecurity burden of Nigeria.

Nigerians were surprised to hear on the night of Thursday, December 17, that the leadership of Fulani herdsmen in Nigeria, Miyetti Allah Cattle Breeders Association of Nigeria (MACBAN), negotiated and freed 344 kidnapped Katsina students from suspected bandits that captured and help them in captivity in a forest in Zamfara State.

The Katsina State Governor, Aminu Masari, who broke the news to newsmen in Katsina had said, “Alhamdulillah. The boys have been rescued and are now at Tsafe, Zamfara State. But, we shall be moving them to Kankara tomorrow (Friday).”

However, in a twist on Saturday, December 19, the National Secretary of Miyeti Allah, Baba Othman Ngelzarma said, “We want to make it categorically clear that Miyeti Allah was not part of the negotiations to free the abducted Katsina students.”

The twist in Miyetti Allah’s supposed role in the rescue of the Kankara schoolboys suggests a hurried move at official cover up of what may have transpired in the course of negotiating with the bandits. This is especially so, as the Nigerian state pursues a narrative of no ransom paid for the Kankara schoolboys.

While government’s denial of ransom payment remains disputed, the claim, if true, confirms that banditry may have become a huge business, from which many are profiteering and would do anything to frustrate a closure.

For instance, in the North-East, amid claim of Boko Haram being defeated, the insurgent group has continued to wax strong. In the North-Central, the case of how soldiers, allegedly working for a top military officer, shot and killed police officers to aid a notorious kidnapper to escape, is still fresh enjoying official cover. Similar controversies are now trailing the activities of bandits in the North-West.

Unless the root causes of banditry are exposed, and government shows sincerity in dealing with the challenge, Nigeria must prepare for a long running battle with insecurity and global damnation.

The Presidency on Sunday, December 12, claimed that 10 boys were abducted by bandits from Government Science Secondary School in Kankara, Katsina State.

Garba Shehu, President Muhammadu Buhari’s spokesman, made the claim while countering Katsina State governor’s position that about 333 students were kidnapped and taken into captivity by their captors.

Shehu had told Hausa Service of the British Broadcasting Corporation (BBC), “Only 10 students were remaining in the hands of the gunmen according to their colleagues who escaped from the gunmen. The number is below figures released by school authorities at the beginning. The school children who escaped said 10 of their friends were still with their abductors.”

Though Shehu has apologised for distributing fake news, the damage it has caused the already battered image of Buhari and his Presidency may not be easily erased. Shehu and other image-makers of the President should understand that there is a limit to propaganda in efforts to shape and change narratives.

President Muhammadu Buhari on Wednesday, December 16, ordered the immediate reopening of the nation’s land borders, which under his earlier order in August 2019, had remained closed.

The government had claimed at the time that the border closure would help check illegal importation of drugs, small arms, and agricultural products into Nigeria from neighbouring West African nations.

Read also: QuickRead: Soyinka’s worries, Ogbeh’s lamentations. Three other stories we tracked and why they matter

However, the Presidency in a tweet on December 16 wrote, “President Buhari has directed the immediate opening of four land borders in Seme (Lagos), Illela (Sokoto), Maigatari (Jigawa), and Mfun (Cross River).”

The reopening of Nigeria’s land borders brings home the point that the policy initiative was not sustainable. This is exemplified by the fact that the said routes remained as porous as ever, causing a rise in inflation and desperate smuggling of not just food items but also light arms.

More importantly, it strengthens the argument that country’s leadership has not been visionary over time and that policy somersaults may continue to define the culture of managing the economy.

The Court of Appeal sitting in Abuja on Wednesday, December 16, nullified the conviction and seven years jail term imposed on Olisa Metuh, the former spokesperson of the Peoples Democratic Party (PDP), and his company, Destra Investment Limited.

Metuh had challenged his conviction and sentencing by a Federal High Court in Abuja presided over by Justice Okon Abang over allegation he laundered N400 million allegedly paid to him and his firm by the then National Security Adviser, Col. Sambo Dasuki (Rtd), in November 2014.

But a three-man panel of the Appeal Court, in a unanimous judgment delivered by Justice Stephen Adah accused Justice Abang of bias in handling the matter saying, “Even an accused person would be ordinarily presumed to be innocent, yet in this case, the appellant was not charged and a lot of damaging things were found in this judgment against him.”

The outcome of Metuh’s trial should be of concern to the Nigerian judiciary which sits atop Nigeria’s Corruption Index of between 2018 and 2020, according to a survey by the Independent Corrupt Practices and Other Related Offences Commission (ICPC).

However, the ruling of the appellate court also shows that the judiciary still remains the last hope of the common man.

While Metuh is yet to escape conviction for his alleged crime, there is, however, the hope that with the Appeal Court ruling, ‘justice must not only be done but must also be seen to have been done’ at the end of the matter.

Another 80 students abducted, rescued in Katsina