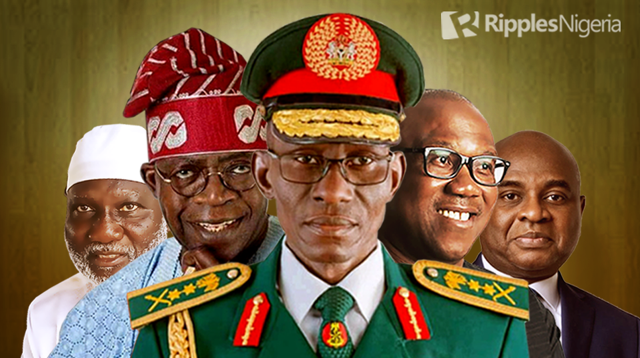 The Chief of Defence Staff (CDS), Gen. Lucky Irabor, claimed last week that the Nigerian military was under immense pressure to compromise the 2023 elections.

1. Military’s claim on pressure from politicians

On December 8, the CDS said at a Ministerial Media briefing organized by the Presidential Communications Team held in Abuja, that the military was under great pressure to compromise next year’s elections.

He, however, insisted that the armed forces would remain neutral during the elections.

Irabor said: “I want to assure Nigerians that the armed forces will remain neutral before, during, and after the election and assist the police and other security agencies in monitoring and securing the process.”

The CDS’ claim speaks to the do-die attitude that has become the hallmark of Nigeria’s political system and is wholly responsible for the emergence of bad leadership that has dragged the country to its knee in the last few years.

Irabor’s remark reinforces the call for the adjustment of the constitution to make political offices less attractive in order to dissuade selfish individuals from vying for leadership positions in the country.

The former Central Bank of Nigeria (CBN) Deputy Governor, Kingsley Moghalu, on December 10 lamented the endemic corruption in Nigeria and its consequences.

Moghalu, who took to his Twitter handle, said: “In corruption, the takeoff point is the padded official budgets.

“Then the inflated and multiply re-awarded contracts. That’s why I believe all federal and state budgets should undergo a forensic audit before submission to the legislature because corrupt evil servants have turned budgets into legalized corruption.”

Moghalu’s statement explains why corruption which has been deeply engrained in Nigeria remains a huge stumbling block to the meaningful development of Nigerian society.

It particularly points to the rot in the Nigerian system known for all kinds of impunity.

It is, indeed, a sad reminder of how moral decadence has become the new normal and right values eroded, particularly among the elites who are expected to be role models for the rest of the citizens.

Read also:QuickRead: Buhari blows hot on handling of LGA funds. Four other stories we tracked and why they matter

The former deputy speaker of the House of Representatives, Yusuf Lasun, on December 7 joined the Peoples Democratic Party (PDP) in Osun State.

He dumped the All Progressives Congress (APC) following his defeat by former governor Gboyega Oyetola in the party’s governorship primary held in January.
The Osun State Governor, Ademola Adeleke, confirmed Lasun’s defection at the PDP presidential rally held in Osogbo on Wednesday.

Lasun’s defection to the PDP, a party he dumped and publicly ridiculed during his tenure as House of Representatives deputy speaker has again confirmed that politics is an interest-driven game where past misgivings are quickly set aside in pursuit of personal goals.

The Labour Party presidential candidate, Peter Obi, on December 4 identified the reduction of poverty as one of the solutions to the country’s security challenges. Obi, who spoke at the second series of Arise TV presidential town hall meeting on Sunday, decried the high poverty rate in the country.

He said: “The issue of insecurity goes beyond the school. We need to also start paying attention to the issue of food insecurity because farmers can no longer go to the farm.

“You can’t deal with the issue of insecurity without first tackling the issue of poverty. The recent statistics by the National Bureau of Statistics (NBS) are not acceptable. How can a country of about 200 million people survive when 133 million are trapped in poverty?”

The ex- governor’s remark illustrates why the government must come up with measures and quickly too to take the citizens out of poverty.

The current insecurity is a product of bad governance which unfortunately has given Nigeria the tag of poverty capital of the world with many in the country living below $1 per day.

Therefore, the onus is on the Nigerian authorities to create an enabling environment for people to find their means of livelihood before the country slips further into the unenviable status of a failed state.

The All Progressives Congress (APC) presidential candidate, Bola Ahmed Tinubu, on December 5 set the record straight on his date of birth and academic record.
Tinubu, who fielded questions at the Chatham House in the United Kingdom, said he was born on March 29, 1952.

He said: “At the time of birth, I was dated March 29, 1952, in the family record. I didn’t think that day I had determined or decided to be president of the Federal Republic of Nigeria or even go into politics. I have had good exposure in life.

“My record is consistent in the school. In the university question, the opposition admitted that they wasted their money and time. The record is there. The transcript is there showing March 1952.”

The constant attack on the APC candidate and others vying for the presidency in 2023 suggests that politicians have reneged on their promise of focusing on issue-based campaigns for next year’s election.

The onus, therefore, is on the parties and their candidates to sell themselves to Nigerians and not overheat the polity by engaging in fake news and hate speech.

QuickRead: Okupe’s conviction for money laundering. Four other stories we tracked and why they matter

QuickRead: Buhari blows hot on handling of LGA funds. Four other stories we tracked and why they matter