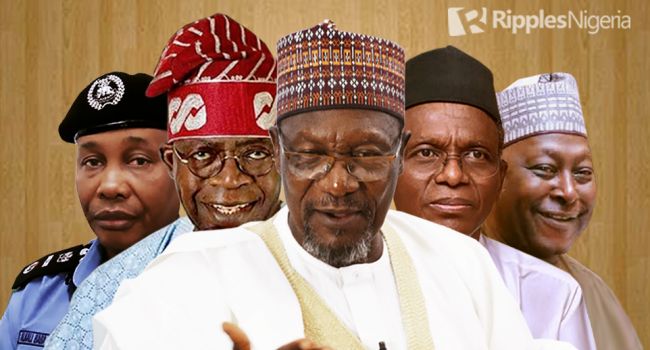 Tinubu at the APC presidential primary polled 1, 271 votes, to defeat 13 other candidates, including Vice President Yemi Osinbajo and former Minister of Transportation, Rotimi Amaechi, in the exercise concluded on June 8.

The Chairman of the APC Presidential Primary Committee, Atiku Bagudu, who announced the results of the election, said: “Asiwaju Bola Ahmed Tinubu having scored the highest number of votes in the APC presidential primary is hereby declared the presidential candidate of our great party in the 2023 general elections.”

The former governor’s victory at the APC presidential primary is the culmination of high-wire politics defined essentially by an intra-class war targeted at displacing a supposed front runner for some alleged regional considerations.

Tinubu’s victory also reaffirms the position of the governors as a very powerful bloc in the ruling party. Their insistence on power shift to the South and resistance to plots to impose the Senate President, Ahmed Lawan, as a consensus candidate show that the governors cannot be shoved aside in the decision-making process in APC.

The Senate Leader, Yahaya Abdullahi, on June 7 dumped the All Progressives Congress (APC) for the Peoples Democratic Party (PDP).

Abdullahi, who represents Kebbi North Senatorial District in the upper legislative chamber, said he dumped the APC because of injustice in the state chapter of the party.
He said: “Yes, I have left the APC due to injustice by the Kebbi State Governor.
It is not just injustice; it’s a serial denial of rights and undemocratic rights which we reported to the party for more than 11 months.”

The Senate leader’s switch to the opposition party a few days after his shock defeat in the Kebbi State governorship primary where he failed to muster a single vote has once again confirmed the widely-held belief that politics is an interest-driven game.

Read also: QuickRead: Tinubu’s remarks on Buhari. Four other stories we tracked and why they matter

The development, indeed, calls attention to the need to quickly resolve the matter of who actually owns the mandate between the party and candidate in a bid to check cross-carpeting by politicians.

The former Secretary to the Government of the Federation, Babachir Lawal, on June 9 warned the All Progressives Congress (APC) against opting for a Muslim-Muslim ticket in the 2023 president election.

Lawal, who made the call when he featured in a Channels Television’s programme, Politics Today, said: “You can have the best ticket but if you don’t win the election, it’s a waste of time. So, we must bear in mind that the vice presidential candidate is going to contribute to winning that election.
“Extending that consideration to the Muslim-Muslim ticket, I live among the Christians, and I know that among the Christians, the question of Muslim-Muslim ticket is a no-go area; it is dead on arrival.”

The imperative for ethnic and religious balancing in the choice and distribution of political offices continues to showcase how fragile the Nigerian project is.

While the push for inclusivity, equity, fairness and justice cannot be sidetracked in a multi-cultural, multi-ethnic and multi-religious society, efforts to address the sensitivities in a sustainable manner must be deliberate or the country risks a disintegration.

4. Terrorists’ massacre of 32 people in Kaduna

The state’s Commissioner for Internal Security and Home Affairs, Samuel Aruwan, who confirmed the attack in a statement in Kaduna, however, dismissed reports that the criminals attacked the communities in a helicopter.

He said: “Since the attack, security agencies and traditional leaders in the locations had been updating the government on the development.
“As of the time of this report, 32 persons have been confirmed dead following the attack.”

The continuous attacks on soft targets and failure of government to bring the culprits to justice speaks to the failure of intelligence and, sometimes, lack of will to tackle the insecurity challenges.

The development also reinforces the call for an overhaul of the country’s security architecture, and furthers the debate on why the government must take another look at the clamour for state police and consideration for international intervention.

The Inspector-General of Police, Usman Alkali Baba, on June 7 approved the establishment of the Electoral Offences Desk ahead of the 2023 general elections.

In a statement posted on its Twitter handle, police said, among others: “The mandate of the Electoral Offences Desk Officers includes the collation and investigation of all electoral offences/complaints from members of the public or any quarters, with a view to determining culpability in line with the amended Electoral Act 2022.”

The electoral offences desk is a sad reminder of the ills bedeviling our electoral system, and the need to continuously build institutions that can enhance the integrity of elections in Nigeria.

Unless there is a strong political will to act right, the disconnect between the police and the judicial arm of government might just be a deliberate game to create holes in the processes, undermine the sanctity of the system and ensure that the people’s votes do not count.

QuickRead: Ortom’s renewed attack on Buhari’s govt. Four other stories we tracked and why they matter

QuickRead: Tinubu’s remarks on Buhari. Four other stories we tracked and why they matter